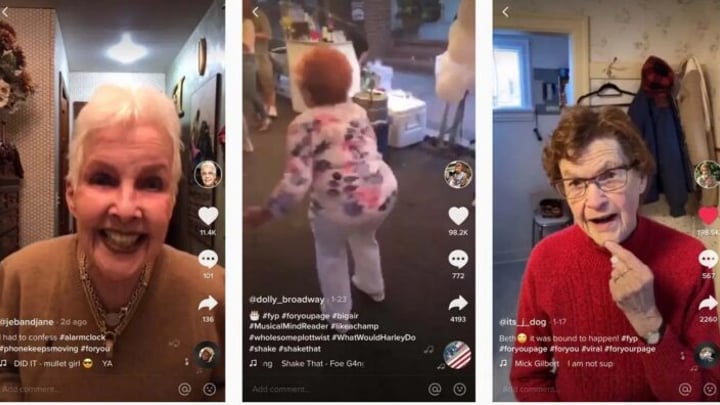 These older TikTok users have gained millions of followers with their online presence. Source: Twitter @jbhprgril

Entertainment app TikTok has proven that age is nothing but a number when it comes to internet fame, with Boomers and senior influencers dominating the ultra-popular platform.

Several older social media stars have started booming on TikTok, gaining thousands of views from their seven to eight-figure fanbase.

Most of them may have started out using the app for fun, or because of their grandchildren’s insistence, but some were lucky enough to go viral- turning their internet fame into paid ads and endorsements.

Here are some of the biggest senior TikTok stars becoming the virtual grandparents to their young followers.

Age: 90
2M Followers | 93M Likes
Jenny Krupa aka @it_j_dog  is a 90-year-old grandma from Canada who initially started making TikToks with her grandson Skylar Krupa back in August 2019, when Skylar realised his “baba” had the potential of staring in some funny videos.

Speaking to Business Insider, Skylar had initially posted these videos in private and shared them only with family members before he accidentally posted a video titled Perks of being old publicly which gained over 1,000 views in 15 minutes.

Jenny herself hasn’t fully grasped the concept of the app nor does she care about getting millions of views, but Skylar explains that his grandma does find filming for these videos “hilarious”.

“She liked the attention from it,” Skylar says, and now “she’s definitely turning into J-dog.”

Lillian Dorniak, known online as Granda Lill, is not new coming to online videos, having made YouTube videos with her grandson, Kevin, since 2012.

In November of 2019, the duo decided to make Grandma Lill a TikTok account with “spur-of-the-moment” videos that gained traction overnight.

One video titled Rules at my funeral has a whopping 20 million views and her name has been uttered by the likes of Jimmy Kimmel and Steve Harvey.

When asked by the New York Post why she makes these videos, the grandmother of five says it “keeps me young”.

Steve Austin has gained his TikTok fame with his humorous attempts at cooking, dancing and magic.

Not seen without a colourful hat, the 83-year-old says joining TikTok keeps his mind active.

“It gives me a reason to get up in the morning,” he said, before sharing that he’s been making videos on the internet for about 12 years, starting with Vine and YouTube before finding fame on TikTok.

“I would make a sandwich or a bowl of cereal and that was me ‘cooking.’ I guess people thought it was funny because I started getting followers. Overnight I was getting thousands of people following me,” Austin says.

“I couldn’t believe it. It’s been a bit overwhelming.”

Charles Mallet has been making videos with his granddaughter Basia since March 2019. Aside from silly content and dancing videos, the duo also use the platform to raise awareness about Alzheimer’s after Mallet was diagnosed with the disease nearly eight years ago.

“And honestly, I feel like I’ve discovered something new for him to do and just for him to get better.”

Mallet also says the platform gives him the opportunity to create memories with his granddaughter while bringing joy to his followers.

“If I can be a grandpa to those who do not have one, or a bonus grandpa, I am honoured and blessed,” he said.

Retired MIT engineer turned internet celebrity Lynja Davis had no idea that her unconventional cooking videos would rack up millions of views.

Davis’s first started making YouTube cooking videos with her youngest son Tim at home during the pandemic lockdown for family and friends, before easing their way on TikTok and Instagram.

Davis hit fame after posting a 29-second breakfast sandwich tutorial on the 4th of July, went viral on TikTok.

“Tim called me and said, ‘Mom, we have 300,000 views.’ I thought he was really joking with me. I really did, because why would anybody watch a bacon, egg, and cheese video?”

Davis says she uses TikTok as a way to show people ” it’s OK to make mistakes also, because you don’t learn unless you try things.”

While TikTok may hold the reputation for being an app designed for younger users, research conducted by Yale University Assistant Professor Dr Reuben Ng found an increasing number of TikTok accounts belonged to “grandfluencers”, aged 60 and older.

“These TikTok elders have become successful content creators in a powerful counter-cultural phenomenon in which older persons actually contest the stereotypes of old age by embracing or even celebrating their aged status,” he said.

“The participation of older adults in social media is vital in ensuring that such ageist ideas are not left unchallenged”.

Would you consider making TikTok videos?