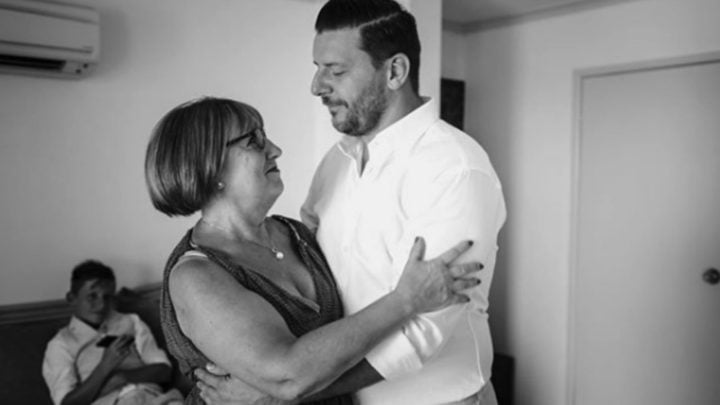 Popular celebrity chef Manu Feildel has spoken out for first time about his mother Evelyne’s ongoing cancer battle. Speaking to The Daily Telegraph on Wednesday, the television personality revealed his mother was recently diagnosed with breast cancer.

“She was incredibly lucky as it was caught early,” Manu said. “Thankfully, she is recovering well while living with my stepdad in France.”

Manu went on to explain that his mother sparked his love for cooking while raising him in Nantes, France, saying she taught him everything he knows about food and cooking.

“My mother really gave me the love of cooking,” he said. “She taught my sister and me how to create so many dishes in our kitchen. Much of the inspiration for my first cookbook — Manu’s French Kitchen — was from recipes Mum cooked or taught me to cook over the years.”

The celebrity chef recently revealed on Instagram he was partnering with Breast Cancer Trials to raise funds for those affected by breast cancer. “By donating to support their lifesaving research, you will be helping to improve and save the lives of people with breast cancer, including my mum Evelyne, who has recently been diagnosed,” he wrote alongside a beautiful black-and-white image of the two.

I’m very excited to be partnering with @breastcancertrials to give mums everywhere a very special Mother’s Day. By donating to support their lifesaving research, you will be helping to improve and save the lives of people with breast cancer, including my Mum Evelyne, who has recently been diagnosed. As a thank you for donating you will receive a personal invitation to join me as I host an exclusive virtual cooking masterclass. Streaming live from my home I will cook two of my favourite recipes and share some of my hints and tips and answer some of your burning culinary questions. The perfect gift for your Mum, your partner or even yourself this Mother’s Day. To donate, click the link in my bio. #trialssavelives #breastcancertrials #masterclassformum 📸- @blueskyphotographyqld

Manu has made a name for himself over the years as a talented chef, thanks to his many successful television appearances, including as head judge on the popular Australia series My Kitchen Rules. He’s also appeared on Ready Steady Cook and MasterChef Australia.

However, it hasn’t always been smooth sailing for the French-born chef. While Manu usually comes across as a happy and jovial character, he told TV Week in 2017 that after losing two of his restaurants in 2014 he fell into depression. “It was tough,” he said at the time. “I lost my pride, my money and went through a stage of depression for a couple of months.”

He said his family and friends, including his fellow My Kitchen Rules judge, Pete Evans, helped him recover. “I got back on track because of my friends, family and the job I have now,” he said. “I don’t have time for worrying anymore — what’s the point? It’s better to smile and be happy than to struggle for something that might work.”

Manu’s Sydney restaurant Manu at L’Étoile Restaurant & Bar closed in 2014, and his Le Grand Cirque eatery in Melbourne, which only lasted a few months, closed its doors not long after.

Do you have a message for Manu Feildel?