‘It was so painful for Mum’: Johnny Cash’s daughter on his affair with June Carter 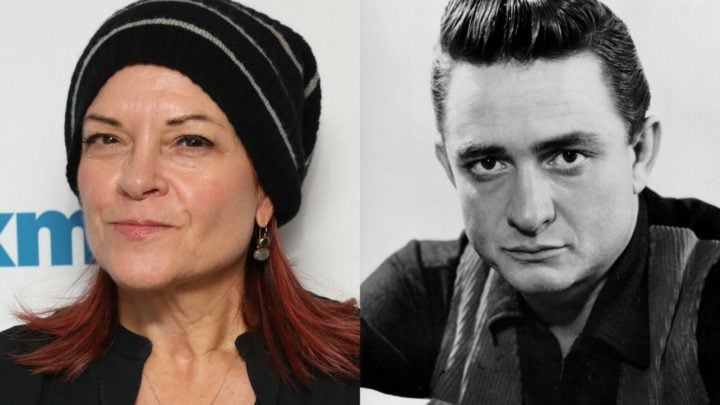 The daughter of Johnny Cash, Roseanne, has shared details into the relationship she had with June Carter following her dad's affair. Source: Getty

The daughter of famous singer Johnny Cash has opened up about her father’s widely publicised affair with June Carter and how the relationship impacted not only her life, but that of her mother – who was left heartbroken after her husband strayed with another woman.

Roseanne Cash, who has also made a name for herself in the music industry, spoke exclusively to People about the famous cheating scandal, explaining while painful for her mum, she was able to look past the challenges and grow a relationship with June. Describing her childhood as “chaotic”, the singer said she knew her dad’s mind worked differently, which was apparently something her mum struggled with.

Johnny and June famously met during a tour, with the two quickly sparking a connection and beginning a relationship behind the singer’s wife Vivian Liberto’s back. They went on to marry in 1968 after Vivian filed for divorce, and had a son together, John Carter Cash.

Incredibly, when speaking to People, Roseanne revealed her father’s most famous song ‘I Walk the Line’ was actually written about Vivian’s fears Johnny would stray on the road, with the words “I’m gonna stay true” implying he wasn’t going to seek out another relationship. Ultimately Vivian’s fears came true however when Johnny met June and the two continued a loving relationship without her knowledge.

However, Roseanne explained while her mother struggled with the affair, the situation was different for herself as she was able to connect with June and develop a friendship. “It seemed inevitable, though it was so painful for my mum,” she explained to People.

“I had two really good examples from women in my life. My mum gave me this powerful sense of discipline, family, mothering and detail orientation. And June gave me this sense of expansiveness and how to live life as a performer.”

Roseanne isn’t the only one of Johnny’s children to speak out about their father, with the performer’s son John last giving a rare insight into his dad’s final days – revealing Cash was “pretty much blind” and in “constant pain” towards the end of his life, in an exclusive chat with Starts at 60.

When the singer passed away in 2003 following a battle with diabetes and other illnesses, he left his legacy and that of his beloved wife June to their son, John. Shortly after, while still grieving both of his parents’ deaths within just months of each other, John came across stacks of papers in his father’s writing with poems, lyrics and notes containing some of his best work. He’s since worked with his siblings, as well as other top artists, to transform the works into a tribute album called, Johnny Cash: Forever Words.

Speaking about the musician’s final days, John told Starts at 60: “Music was his therapy towards the end, it was his life and his only way of self expression. He was pretty much blind, he was in constant physical pain, he had bouts of pneumonia, but he kept going and persisting. In the face of his own mortality, no matter what the mountain was that he was encountering, he persisted.”

The close proximity of his death to that of his wife’s – who he married in 1968 after proposing just months before on stage – has led many to wonder if he could have died of a broken heart, but John insisted: “I believe he would still be with us today if his body hadn’t given out. It was the love that carried him, and it was all tied in with music.”

Asked about his mother’s wish for his father to keep performing, John said: “Yes it was her wish, it was both of their wishes. The songs came out that much stronger with the pain, it was how he expressed himself.” He added: “The strength and persistency in the face of whatever it was that he encountered, he continued even though his body gave up.”

Were you a fan of Johnny Cash? What was your favourite song of his?