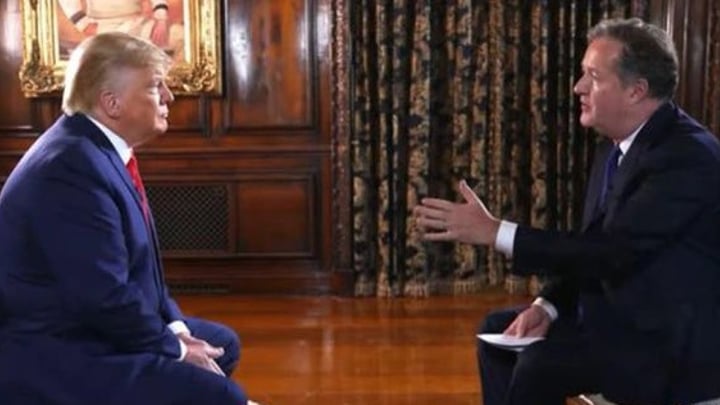 The pair argued with each other over Trump’s election loss, with Trump labelling Morgan a “fool” for believing it wasn’t a rigged loss.

Reminder: this (brilliant) promo so annoyed the Trumps because they just can’t handle the fact that I refuse to accept the 2020 election was rigged or stolen from them. Donald lost & needs to accept that & get over it – or his chances of winning again in 2024 will be zero. pic.twitter.com/UYYZGfYPYH

Morgan and Trump bonded over their feelings of disdain towards Meghan Markle and her Royal husband Prince Harry, however, Trump took a swipe at the host for how he handled himself.

The Apprentice boss said Morgan “overreacted” when he stormed off-set of Good Morning Britain (GBM) when he was called out for his relentless attacks on Meghan Markle.

“I thought you overreacted by the way,” Trump said.

Morgan interjected asking what Trump would have done instead.

“Here’s what happened: I watched the interview Oprah Winfrey article with Meghan Markle and Prince Harry, and I’m angry watching it. I think the attacks on the Royal family were disgraceful,” Morgan said.

“So let me ask you what you would have done. It turns out Meghan Markle writes to my boss… and basically demands my head on a plate and the next day I’m told I’ve either got to apologise for disbelieving her or I have to lose my job.

“Now what would you have done?”

Trump said “the guy was a stiff” before elaborating: “I would’ve left but I wouldn’t have attacked the weatherman – he wasn’t worth it.”

“I think you were right about the thing, I just didn’t like the way you handled it.”

The former President said he wasn’t sure if Morgan would air the conversation before Morgan assured him that the show was “uncensored”.

The British broadcaster began the show with an opening monologue saying his new television show is a “no cancel zone”, celebrating “real free speech”.

“For all ultra-sensitive, permanently offended woke snowflakes who may have accidently tuned in tonight, you’re not going to enjoy this show,” Morgan said.

“In fact, it’s going to really annoy you – it may even provoke trauma.

“Because I’m going to be constantly celebrating the one thing you can’t abide – free speech.

“And that’s real free speech – not your kind of free speech, what only your kind of opinions are allowed and anyone with a different opinion has to be shamed, abused and cancelled – their careers and reputations destroyed.

“No, the free speech that’s supposed to be the bedrock of any real democratic society – the kind where it’s okay to disagree, it’s alright to respect and tolerate each other’s views.”

The controversial TV personality faced criticism after he promoted his “free speech” endeavors, likening himself to former South African leader Nelson Mandela in his fight against apartheid.

Twitter seems very upset by me comparing myself to Nelson Mandela with my ‘long walk to freedom of speech’ quote. So here are some pix of me having fun with the great man to really wind you all up… ???????? pic.twitter.com/fg9A4SNznI

“I feel like Nelson Mandela when he came out of prison. It’s like the long walk to free speech freedom,” he said.