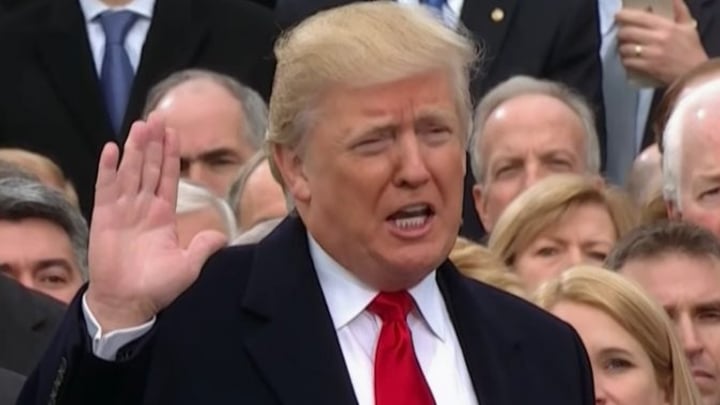 It's the inauguration with a twist.

The team behind the bad lip reading videos are back and this time they’ve taken on President Donald Trump’s inauguration.

The hilarious video shows snippets of Trump, the Obamas, and a host of other politicians at the swearing-in ceremony, but has dubbed in new voices over the top.

Instead of hearing their real conversation the video has inserted plenty of nonsense that has left people around the world in stitches!

Trump and Obama are seen smiling at each other in the video while muttering about how much they hate each other.

When in real life, Trump was talking about building the wall between the US and Mexico in his speech, the video shows him giving an impassioned speech about how he wants to build a bar in Connecticut called Lady Brown.

The whole thing is so ridiculous you have to watch it to understand just how funny it is.

Later, the makers of the video cut the music at the inauguration ball so it looks like Trump and his wife Melania are shuffling around awkwardly in the silence.

It’s not the first time the video makers have targeted an inauguration. In 2013 they made a similar video poking fun at President Obama and mocking his team and they’ve covered plenty of other events, too.

The videos have become hugely popular over the years and their latest effort is no different. Even Trump supporters have said it gave them a good laugh!

Take a look and tell us what your think. Share if it give you a giggle!

Did it make you laugh? What’s your favourite part?