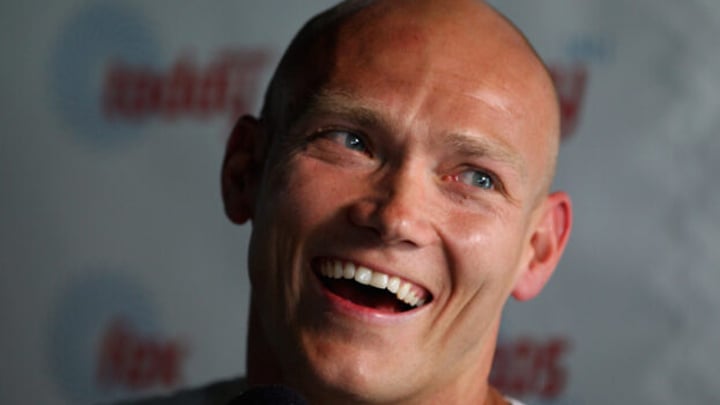 Despite the difficulty Michael Klim has faced in regard to his condition, he has received just as much support from those around him. Source: Getty Images.

Following his announcement that he had been diagnosed with a rare neurological disorder in 2020, swimming great Michael Klim has opened up about the difficulty of revealing his condition to friends and family and the support he has received since.

Klim was diagnosed with chronic inflammatory demyelinating polyneuropathy (CIDP), which according to the Brain Foundation “is a neurological disorder that results in slowly progressive weakness and loss of feeling in the legs and arms”.

The former Olympian took to his blog in July 2022, where he opened up about living with the condition while revealing that he had been diagnosed two years ago after “dealing with chronic ankle problems and degenerative back issues for quite some time”.

He made the admission in an effort to raise awareness for those impacted by the condition.

“Over two years ago I was diagnosed with an autoimmune disorder called Chronic inflammatory demyelinating polyneuropathy (CIDP) which is a neurological disorder condition that targets your body’s nerves, especially the areas of the arms, hands, legs, and feet,” he revealed.

“Symptoms aren’t the same for everyone but in my case, it has affected my legs and feet.”

Now in a recent interview with New Idea, Klim opened up about the difficulty of revealing the news to his family, particularly his children.

“From the get-go I knew there was no cure – as a parent, I didn’t want to hurt the kids emotionally, but I couldn’t continue hiding it from them anymore. I was constantly falling over, and it got to the stage where I couldn’t stand up,” he told the publication.

“When I did eventually sit them down, Rocco and Stella cried, and young Frankie and our fur baby Yuki looked at me as if to say ‘it’s OK, Dad, we’re in this together’. It still breaks my heart.”

Klim also spoke of the difficulty in telling his parents who “took it hard”.

“As did my beautiful sister Anna, who has spent her life protecting me from the bad things – they remain my biggest supporters,” he said.

Despite the difficulty Klim has faced in regard to his condition, he has received just as much support from those around him, especially his wife Michelle who he describes as his “human walking stick”.

“She has great energy, and a genuine sense of calmness. She’s my human walking stick – and the kids love her as much as I do!” he said.

The swimming community has also been on hand to offer their support with many of Klim’s former swimming teammates rallying around the swimming great.

“And to the wider community who’ve buoyed me with their support – it says a lot about our sport, and the heart-warming camaraderie after all these years.”