Have a shower, Nick! 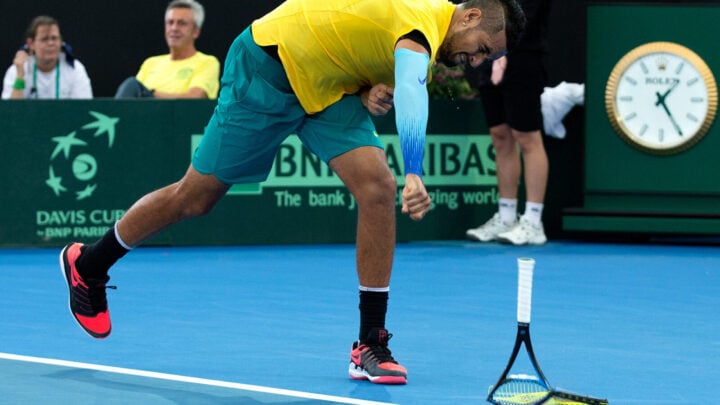 This blogger has some sage advice for Nick Kyrgios' heated temperament. Source: Getty

The Kyrgios’ success tsunami only came to a crashing halt when he lost at the Canadian Open’s quarter-final to his Polish nemesis: No.10 Hubert Hurkacz.

Yet, just one match before, Kyrgios had the world No.1, Daniil Medvedev, for breakfast in two straight sets.

So, what did Novak Djokovic at Wimbledon and Hurkacz at the Canadian Open, have in common in depriving Kyrgios of victory?

It was that they both had a shower break after the second set.

Current tennis rules allow players a 3-minute bathroom break, which only starts when the player reaches the bathroom and another 2 minutes to change his/her clothes.

In practice, this tends to amount to a 10-minute bathroom break.

Yet very few players grab this opportunity to recharge themselves for the rest of their game.

I noticed how Djokovic has become one such player, who jumps on this opportunity regularly, particularly when he has lost the first two sets at Grand Slams.

I watched him with awe, twice recently, when after having lost the first two sets, he rushed out for a bathroom break and came back completely reset, fresh as a daisy, re-energised and totally centring on his game.

He took charge of the remaining sets with an iron grip on match control, crushing his stunned opponents, who could have been excused for thinking that the guy on the other side of the net was not the same one they had just beat in the first two sets.

After each shower, Djokovic looked like a Phoenix rising irresistibly from his ashes.

The following was written by a Sportskeeda tennis commentator, who witnessed the Kyrgios-Hurkatz Quarter Final.

“Nick Kyrgios was seen venting his frustration after the Pole went to the toilet to change his clothes. It happened right after the Aussie took the second set. Reflecting on the incident after the match, Kyrgios suggested that the weather conditions were too good for anyone to change their clothes.”

“Obviously when you’re playing and you stop for like five to 10 minutes, it doesn’t help your body,” the publication reported Kyrgios had said.

“My body was so stiff after that, I couldn’t move properly. I mean, it’s within the rules. I’m not going to complain. I completely stiffened up. My knees were sore, my back was sore.”

So what did Kyrgios do?

He sat and waited with increasing frustration for the start of the third set.

In this idle wait, of course, his overused adrenaline glen, which worked extra-hard to pump enough adrenaline into him to get through the pain to secure a win in the second set, now slowed down too much.

Well, such sitting around in this condition certainly could not refresh his battered body and exhausted mind.

By contrast, his opponent came back from his wonderful shower break all refreshed.

So, why did Kyrgios not give himself exactly the same resetting shower break that he could have had to keep up the momentum and refresh his aching body?

Probably, because he, like most of the other players who get fatigued, has not come to appreciate the immense advantage of a shower break and conversely the immense disadvantage of forgoing it.

One legal opportunity for tennis players to recover when their body is fatigued is a medical break, but it is not permissible to take unless the person suffers from a genuine medical incident.

But, any player can resort to the other opportunity for recovery after the second set – taking a quick but vigorous shower.

During his unbroken series of victories recently, Kyrgios has consistently left all he had out on the court.

It was only too understandable, that after so many successful Herculean games, he would eventually get fatigued.

So, it was in such a rundown state, which he failed to remedy during the break after the second set with Hurkatz, that Kyrgios went into the decisive last set against an opponent who smartly exploited the shower break opportunity to get a power-boosting advantage over Kyrgios.

The shower break is brief, yet its advantage to the player who resorts to it cannot be overestimated.

Having a shower, no matter how brief, is a form of hydrotherapy.

I’ve noticed that every time I fail to have a shower in the morning and have only one at night, I go through the day far less energetic and efficient than on a normal day when I start with a shower.

Now, imagine how a tennis player feels after the second set, fighting for a victory in a highly competitive game.

Their body tends to swim in salty, skin-burning sweat from top to toe.

Their shoulder would already be at least somewhat sore from trying to hit powerful first serves.

Their legs would be feeling heavier from all the running around and so on.

But, the player who rushes out after the second set to have a shower has a new tangible goal to keep him going.

They have to have that shower and get back to the court in time to not incur a penalty.

So they cannot waver in concentration to achieve this.

But the moment the first drop of clean water falls on their body, the wonderful hydrotherapy begins.

The cold water refreshes them and the hot water improves blood circulation, relaxing tight muscles and acting as a tonic to aching muscles and joints.

With a quick alternation of hot and cold water, finishing with a final cold rinse seals the hydro-energy in the body and sharpens concentration.

So, a shower like this can do wonders to the player, especially those like Kyrgios, who when overheating on the court, are sometimes at risk of completely losing the plot.

So Nick, the next time you’re playing, don’t miss out on this wonderful opportunity to recharge yourself and let that cold rinse cool your temperament to help it from overheating and imploding.

"The player who rushes out after the second set to have a shower has a new tangible goal to keep him going."