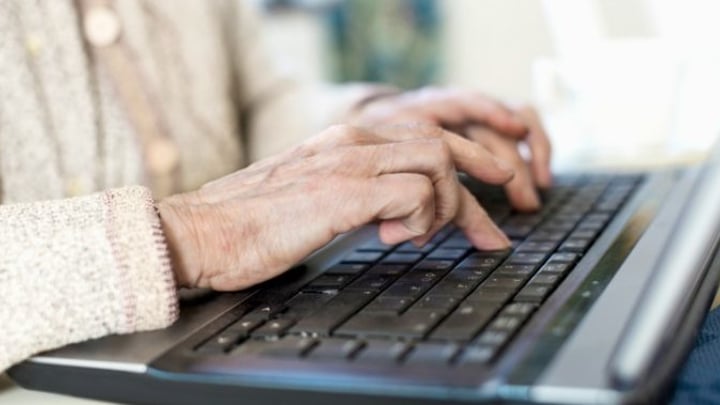 Gumtree sellers are being told to be careful following an attack over the weekend. Source: Getty (Stock image used)

Many people across Australia and the world use Gumtree and other online services as a quick and easy way of selling goods they no longer need.

While it’s often a fast way to make cash, authorities are warning people to beware after a Gumtree seller in Brisbane was held at gunpoint in a sale gone wrong over the weekend.

According to Monday’s episode of Sunrise, the simple transaction took a terrifying turn when a man was threatened with a gun by a group of thieves. The men had originally agreed to purchase an iMac computer they saw listed on the classified ads website, but things turned violent when they arrived to pick up the computer. The horrifying incident was captured on CCTV.

Brisbane man Teng Hin Cheong was assaulted by the men when they arrived at his home. His terrified girlfriend hid in a bathroom during the incident and he explained that he fought back when he noticed the guns were fake.

Read more: Average Aussie has around $4k worth of unwanted items lying around: Report

A new safety warning has been issued to Aussies buying and selling items online after a Gumtree seller was held at gunpoint in his home by thieves coming to collect a computer. 😳 #sun7 pic.twitter.com/2exbJOnSKL

According to the report, an attacker kicked the door down and eventually fled with his accomplices with a stolen iPhone. Cheong experienced injury to his ears and arms before the thieves fled the scene.

A Gumtree spokesperson told Starts at 60 the safety and security of the Gumtree community is their main priority.

“While the majority of our community members have a positive experience, sometimes bad seeds do target our users,” a spokesperson said in a statement. “We work closely with law enforcement to assist with reported incidents, and urge users to report any suspected unlawful activity to the Police. We also encourage anyone who thinks they have come across anything suspicious or concerning to report it to us using the ‘report ad’ function.

“We recommend everyone using Gumtree should visit our Help section for tips on how to have a safe and successful experience and to be vigilant when using any online marketplace.”

Meanwhile, cybercrime Expert Nigel Phair appeared on Monday’s edition of Sunrise where he explained to host Samantha Armytage that Aussies are too trusting as a society.

“We’ve got to remember to use our real-world sensibilities when operating in the online environment,” he warned. “As rare as this case is, we still really need to keep our guard up.”

Armytage said the whole point of Gumtree was that strangers come to your home to purchase items you’re selling, before asking how Australians can stop attacks like this from happening. Phair said there were a number of things people could do to protect themselves when selling items online.

Firstly, he said although strangers do have to come to your property to buy the items, they don’t have to be invited inside. Instead, he said transactions can take place out the front, on a porch or in a garage. He also said people going to purchase items need to practice caution.

“If you’re going to pick something up, it’s probably a good idea to take a trusted friend with you,” he said. “If you’re unable to do so, tell one or more people where you’re going and what you’re doing and how long you’ll be,” he said.

Despite the frightening attack, Phair said he thought websites such as Gumtree were mostly safe to use, noting many rate potential users online to work out who is a good person and who isn’t. Still, he explained there were cases where danger can and does happen.

“We’ve just got to be really weary as we spend more time online, that these instances are unfortunately going to happen,” he warned.

He said that there hasn’t been a dramatic increase in attacks like this, while Armytage said it was best for people to be aware of these attacks.

Do you use Gumtree? Has anything like this ever happened to you?