Grandparenting: The connection, joys and struggles of helping with childcare 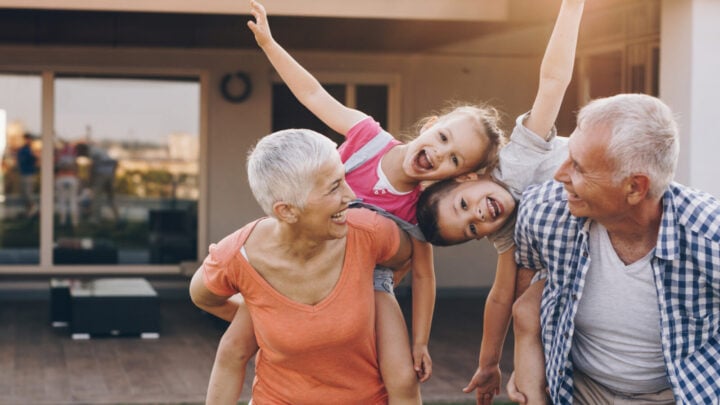 Grandparenting is one of lifes many joys. Source: Getty

Having children is one of life’s greatest joys; you dedicate your life to raising them and then sit back and watch as your children become parents and you become a grandparent.

Grandparenting brings a whole new world of enjoyment itself, combining all the love and the ‘fun bits’ of parenting as well as the delight of helping out your own children by giving them time to go to work or have a moment to themselves.

New data published by the Australian Institute of Family Studies (AIFS) in the Families in Australia Survey found that two in five grandparents with grandchildren under the age of 13, actively help with childcare for mutually beneficial relationship building.

Our latest report on grandparents and child care in Australia found that two in five grandparents with a grandchild aged under 13 years were providing some child care. Read the report and find out more: https://t.co/EkatXFiqjB pic.twitter.com/9MFu6SKSSG

Starts at 60 spoke with Senior Research Fellow at AIFS, Dr Jennifer Baxter, who said the motivation behind grandparents taking on some of the responsibility in looking after the children was to build strong family connections.

“There was a really strong dimension of this care being very family oriented and they were doing it because they wanted to spend time with the grandchildren, to support their own children,” Dr Baxter said.

“What came through most strongly was this family connection. It was an underlying driver for many grandparents for why they wanted to provide the childcare.”

The driving motivator of connection was evident through comments from participating grandparents.

“Being a grandparent is the best thing that ever happened to us. Our two, two-year-old grandchildren (son and daughter had a child each a month apart) have brought us so much joy and made our family connection even stronger,” one grandmother said in the report.

“Love the connection with our little grandchild, but also love to connect with the whole family so often have family time all together.”

“I can’t believe the pleasure I get from spending time with my grandson. Watching him develop, grow and take pleasure in learning about nature, relationships and loving is wonderful. It’s even better than having your own children, because you are not so busy and so you have time to soak up the moments.”

The study found that overall, the “overwhelming positives” were “feelings of closeness to the family generally” and “the enjoyment of caring for the grandchildren”.

Dr Baxter said that even though there was one negative associated for the grandparents providing childcare, it was still outweighed by a positive.

“It was interesting to see on the wellbeing of the grandparent, where 44 per cent found that providing the childcare was tiring. For example, someone talked about providing childcare to a very active toddler and how that can be exhausting,” she said.

“However, we also asked them if providing that childcare energised them and 71 per cent agreed. Even among the ones saying it’s tiring, a high proportion are saying it energies them.”

One grandmother participating in the study said that the level of enjoyment versus how tiring it can be, “usually depends on the mood” of the child.