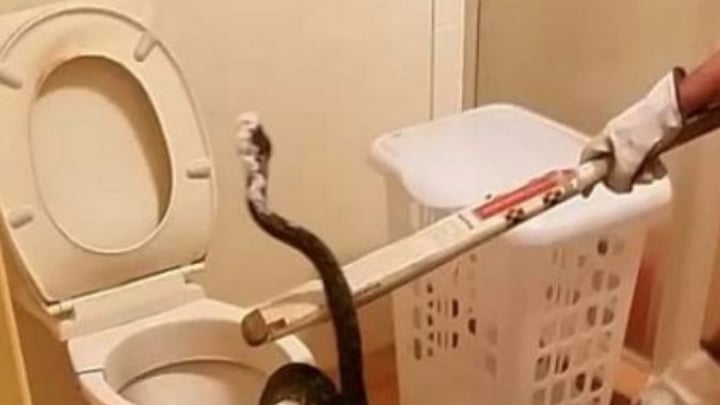 A family got the surprise of their lives when they discovered a huge python lurking in their toilet. Source: Facebook.com/QueenslandUrbanUtilities

When you get up in the middle of the night to go to the bathroom, the last thing you’d expect to find lurking in the toilet is a large python.

That’s exactly what happened to a family in the Brisbane suburb of Chermside West at the weekend. Queensland Urban Utilities took to Facebook on Tuesday with photographs of the huge snake being removed from the toilet.

In photographs that are enough to make the skin of anyone who hates the reptiles crawl, a man could be seen using a cricket bat to lure the snake into a bucket and suitcase.

“Only in Australia!” the post teased. “A family in Chermside West found a surprising 4th ‘P’ in their loo on the weekend, when this python plopped by for a visit.”

They joked that python was the fourth ‘P’ after pee, poo and paper.

The post attracted hundreds of comments from people who were both amused and frightened by the discovery of the snake in the toilet.

One person joked: “I had to laugh, my ex-husband would always excuse himself to ‘give birth to an anaconda’ Never actually thought it was true.”

Another person said: “This is why I check the toilet every time before sitting down.”

A third asked: “How on earth do they get in?”

Others questioned if the snake had toilet paper on its head.

With the warmer weather here for another year, snakes are coming out of seclusion and hibernation in search of a mate. Snake catcher Tony Harrison previously told 7 News that “snakes go crazy” when the weather gets above 23 degrees.

“During this time of year, the males, their common sense goes out the window and they will cross peoples’ backyards, schools, shopping centres and whatnot and therefore humans and dogs interact with the snakes and that’s when the problems happen.”

It’s also not the first time a snake has been found lurking around a home. In August, footage of a giant python scaling the side of a suburban house on the Gold Coast went viral. In footage uploaded online, the snake could be seen making its way high above the ground and to the roof of the two-storey house.

The man who filmed that footage said the snake had been living in the rafters of his shed for six months, before venturing out in search of food.

In Australia, it is an offence to kill, injure snakes from the wild. According to the Queensland Government, a snake catcher should always be called to ensure the snake is safely removed and so there is no injury to humans, their pets or the snake. The snake will be relocated to a safe environment. Equally, there are a number of ways people can snake-proof their homes.

In backyards, it’s important to keep garden beds away from the home and that the lawn is short. Any food scraps should be placed in closed compost bins to prevent rodents, which are a favourable snack for snakes.

Equally, nurseries and greenhouses are often warm and can attract snakes. They should always be kept tidy, while plant trays should be elevated to ensure you can see. Bird aviaries should also be secured to ensure snakes don’t attack family pets.

For the home, the easiest way to keep snakes at bay is to block all potential entry points. This could be as simple as closing a window or a door. If a snake is spotted, it should be dealt with by a snake catcher and non-experts should not try and move or kill the snake.

Have you spotted a snake this snake season? How do you snake-proof your home?