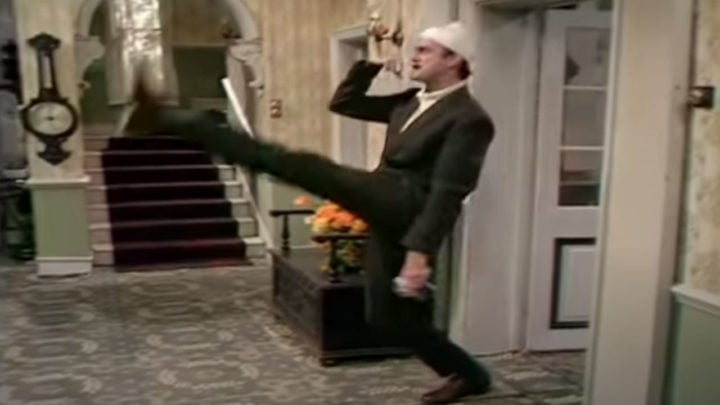 A well-known episode of iconic British comedy series Fawlty Towers has been removed from an on-demand streaming service owned by the BBC.

The episode, titled ‘The Germans’, was taken down on Thursday amid ongoing debate around the removal of outdated or offensive content from entertainment platforms, as support – both online and via protests – continues to swell for the Black Lives Matter movement both in Australia and overseas.

UKTV, which is run by the British public broadcaster, confirmed the decision was made to pull the final episode of the first season because it contains racial slurs. However the on-demand service went on to say that it is still considering its options about whether to permanently remove the episode.

“UKTV has temporarily removed an episode of Fawlty Towers ‘The Germans’ from a Gold Box Set,” a statement published on Twitter read. “The episode contains racial slurs so we are taking the episode down while we review it.

“We regularly review older content to ensure it meets audience expectations and are particularly aware of the impact of outdated language.”

An update on Fawlty Towers for our viewers pic.twitter.com/O0kFR4Md8E

Fawlty Towers – which ran from 1975 to 1979 – starred John Cleese as cynical hotel proprietor Basil Fawlty. The episode in question sees Basil goose-stepping around the fictional hotel in Torquay, and is responsible for coining the iconic phrase “Don’t mention the war!”

However it is comments made by recurring character Major Gowen during the episode that led to its removal. While the racial terms are often removed by broadcasters nowadays, the original version of the episode features a scene in which Gowen references the West Indies cricket team.

Viewers reacted to the news online, with many fans of the show questioning the decision, while others agreed with UKTV’s stance. One user wrote on Twitter: “Surprised they haven’t pulled the rest of #fawltytowers – after all the way Basil treated Manuel has to be racist or involved some racist slurs.”

However another user commented: “Yes. Let’s pretend it never happened. Genius.” While another said: “I agree, with comedy it should be taken into account it’s fictional and a different time, I don’t want to loose Ab Fab, French & Saunders, Gimme Gimme Gimme etc. It’s an important part of my gay culture and history I think context and a statement at the beginning would be fine.”

It comes after US streaming service HBO Max made the decision to pull acclaimed 1939 movie Gone With the Wind from its platform, which sparked a huge backlash, including from indigenous Today show presenter Brooke Boney, who argued that instead of pulling controversial content, platforms should instead work to provide greater opportunities for people of colour.

“If these companies truly want to make lasting change, and not just virtue signal in a moment of turmoil, then they need to support new talent and open doors that have been closed to people of colour,” Boney said in a passionate monologue on Thursday’s show. “If they truly want to make a difference in the way we tell stories about who we are as a society we don’t do that by deleting things we have done in the past.”

Netflix has also removed several programs this week, including several of Aussie comedian Chris Lilley’s shows, along with UK series Little Britain, saying that “times had changed” since the show first aired in the early 2000s.

Do you think these TV shows and movies should be removed? Or should we learn from the past?