‘Exhausted’ Grandma not so thrilled with daughter’s pregnancy news 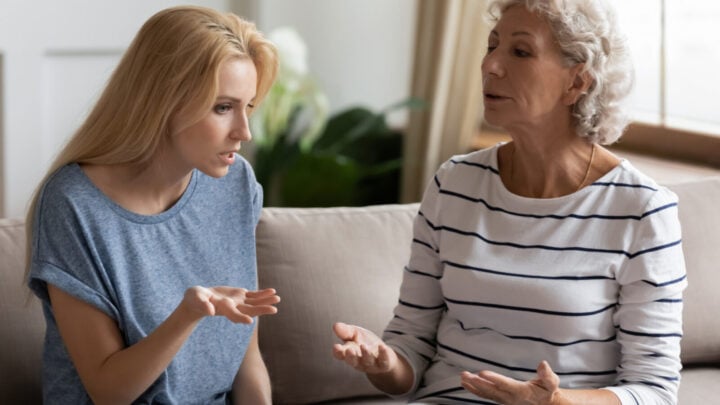 The grandmother regaled the audience with the icy encounter that followed the pregnancy reveal. Source: Getty Images.

An “exhausted” grandmother has revealed that she is not exactly over the moon that her daughter is expecting another child, claiming she is often left to babysit her grandchildren as well as help out financially.

Taking to the Reddit forum, Am I The Asshole, the anonymous grandmother explained the situation further.

“My daughter and her husband have recently announced their fourth baby in a small little family gathering I hosted,” she wrote.

“I know I should be excited and congratulatory, but I’m really not, I just felt exhausted the moment she announced.”

She went on to detail how her daughter often shirked her parental responsibilities, leaving her to not only look after her grandchildren regularly but also having to act as the ‘Bank of Mum’, lending money to her daughter on a regular basis.

“My daughter and her husband aren’t really well off financially, so they regularly drop off the kids with me since they can’t afford daycare. Of course, I don’t mind watching them but problem is that they’ll pick them up quite late then the agreed time, so like I say 9, but then they come at 1. Sometimes it feels like my grandkids spend more time with me then them,” she explained.

“They also rely on me for money as well, but I’m not sure if the money I send them is being used on my grandchildren as I’ve seen them buy new stuff for themselves after I give them money for something relating to the kids.”

The grandmother then regaled the audience with the icy encounter that followed the pregnancy reveal.

“Well, my daughter noticed my lack of a noticeable reaction and asked me if I’m happy to be a grandma again and I honestly blurted out ‘Again? Really?'” she recalled.

“I didn’t mean to, but she didn’t take that well and said I was a horrible person for not being excited for her and for getting a new grandchild and the whole room just became tense after that.

“Me and my daughter haven’t talked much since, but she still drops off the grandkids. Apparently, she’s waiting for an apology until she’s ready to talk to me, and while I’m hesitant, I don’t want to split apart the family.”

Any concerns on the grandmother’s part that she was out of line were quickly alleviated with many on the forum voicing their support for the worn-out matriarch’s feelings.

“Free daycare grandma absolutely does not need to be excited about her “clients” creating more unpaid work. Perhaps you should stop watching the kids at all except for holidays and emergencies. Just start being “too busy” to parent their children for them,” one user wrote.

Another encouraged the grandmother to take a stand.

“Stop being used!!! She will continue to behave this way as long as you let her. You are the only one to blame for allowing them to abuse you. Let them be parents and make them take responsibility for their children. Time to enjoy your life. If you don’t than you can’t complain anymore. Your grandkids will be fine,” they wrote.

“But you need to start setting boundaries and holding to them,” another commented.

“Stop babysitting and giving them money,” one user suggested.

“If you hadn’t been helping them all these years they would have realized they can’t afford more kids. Seriously, stop doing it. They are using you!”

Finally, one commenter assured the grandmother that she had nothing to feel guilty about.

“This affects you so you’re allowed to have an opinion on it,” they said.

“Also, the fact that she’s still using you for babysitting while she is supposedly mad at you is rude beyond belief and proves me to me that she knows she’s taking advantage of you.