End of an era: Australia’s original ‘Pub with No Beer’ listed for sale 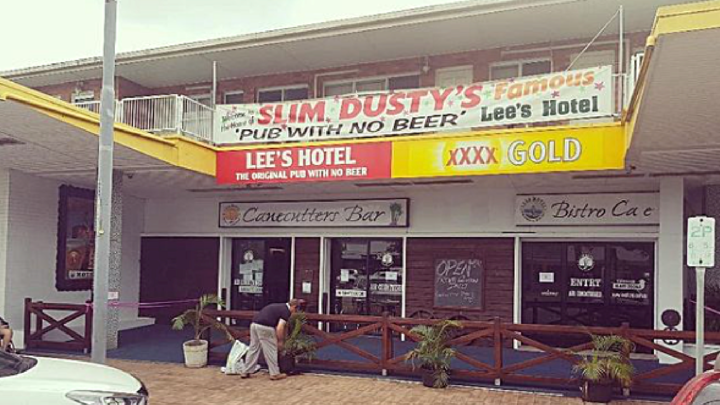 The iconic Lee’s Hotel, in Ingham, north of Townsville, made famous by country singer Slim Dusty’s Aussie classic titled A Pub With No Beer, has been listed for sale for the first time in 50 years, The Courier Mail reports. And this piece of Aussie history could be yours for a whopping $3.5 million!

The 1957 song, which became Australia’s first international hit, was based on the poem A Pub Without Beer by Ingham sugarcane farmer and poet Dan Sheahan. He reportedly wrote the poem in the pub, which was then called Day Dawn Hotel.

The story goes that in December 1943, American servicemen passed through the hotel overnight and drank all the beer. The next day, a parched Sheahan rode on through on his horse only find that all the beer had been drunken dry. He ended up sitting down with a wine instead, and penned the now-famous poem. To commemorate the late poet, there’s now a statue of him on his horse outside the pub.

Since then, the hotel has become an Aussie icon, and has found itself on many must-do Australian pub lists thanks to its rich history.

According to The Courier Mail, real estate agent Antonio Curulli, has confirmed that the pub will be sold with all of its remaining stock — yes, beer included! “It has plenty of beer now, and if you buy it, you get the beer as well,” he said. “It is being sold plus stock.”

It also comes with a steakhouse, beer garden, gaming room, 20 motel rooms each with their own ensuite, a bar and bistro, retail shops, and a possibility for a new bottle shop! So if you’ve got an extra $3 million lying around, why not snap up this iconic Aussie pub?

And if you haven’t heard the classic hit in a while, here’s a reminder — it’s a surefire winner!

Did you know the history of the Lee's Hotel?