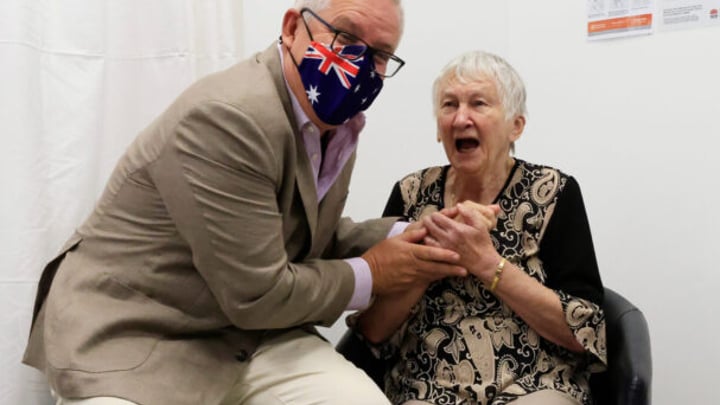 Aged care resident Jane Malysiak later admitted she didn't realise Scott Morrison was the prime minister until after their photo opportunity. The PM is unlikely to forget her, though! Source: Getty

There’ll be no need for Pete Evans to worry about whether the first person in Australia to receive the Covid-19 vaccine is a ring-in orchestrated as part of a grand conspiracy to fool the public – because no actor would’ve made the moment so funny or so very Aussie!

The PM introduced Jane as having seen many historic days over the course of her 84 years. “She grew up in Poland in the Depression, she went through to the Second World War. She came to Australia. She built a wonderful life and is still living it gloriously today,” Morrison told the cameras at the Castle Hill Medical Centre in Sydney on Sunday.

Morrison himself got the jab at the event, as did Jane, Paul Kelly, Australia’s chief medical officer, and Alison McMillan, the country’s chief nursing and midwifery officer. The prime minister then had a few words about vaccine refusal, which has been a hot topic in recent days, after Facebook shut down reputable news sources, allowing vaccination conspiracy theories to run rife.

“We’ve gone to great lengths with our scientific and medical community to ensure that the things you want to know about, that information is there for you. You’re right to ask those questions. And that’s why we have worked hard to ensure that you have that information. That our GPs are aware and that you can have those conversations,” Morrison said.. But what matters is that we all get through this together and we get through this together … today I put my shoulder to the jab, and that’s what I’m asking Australians to do in joining me and all of their fellow fellow Australians, as we continue on the successful path we’re been on.”

So far, so standard when it comes to a bit of political grandstanding – which could hardly be blamed when celebrity chef Evans spent Saturday in a Sydney park exhorting anti-vaccination protesters to “stand up in whatever capacity you can” against the vaccination project, as he was cheered by onlookers carrying signs that called herd immunity a “scam” and accused Microsoft founder and billionaire philanthropist Bill Gates of creating the pandemic. Yes, really.

But then the PM came undone, by encouraging Jane to join him in doing Winston Churchill’s famous ‘V for victory’ hand signal for the cameras. It was “V for vaccine” in this occasion, Morrison joked.

Jane was happy to comply, raising her hand to show a victorious V – before quickly turning her hand around and flashing the waiting press corps, with cameras rolling, an ‘up yours’ more commonly seen exchanged by infuriated motorists or cheeky school kids. Cue a lot of loud laughter from onlookers as it took Morrison a few seconds to regain his composure and, his face still a mix of shock and amusement as he quickly put his hand over Jane’s, while explaining “always front, always front!”.

Speaking to Sky News later, Jane was unrepentant, telling host Laura Jayes on Monday that she didn’t realise the man beside her was the prime minister … before she accidentally demonstrated the ‘up yours’ sign again for host Jayes … several times.

“I’ve never known about it, so now I’ve learned something,” Jane commented as she repeated the obscene gesture beloved by many Australians who think actions speak louder than words. Jayes was delighted to be given the two-finger salute by Jane, though, saying the irrepressible 84-year-old reminded her of her grandmother.

I loved every minute of talking to Jane this morning.

She is a delight. She reminded me how much I miss my grandma.

Her generation has given us so much… and continues to do so.

As for Morrison, he should probably know of the danger of attempting any kind of hand gesture for the cameras. After all, he’d already copped a ribbing for having had Cobargo resident Zoey McDermott refuse to shake his hand during his visit to the New South Wales town during the January 2020 bushfires.

Are you with Jane and Scott Morrison on having the jab? Or do you reckon Pete Evans is onto something?