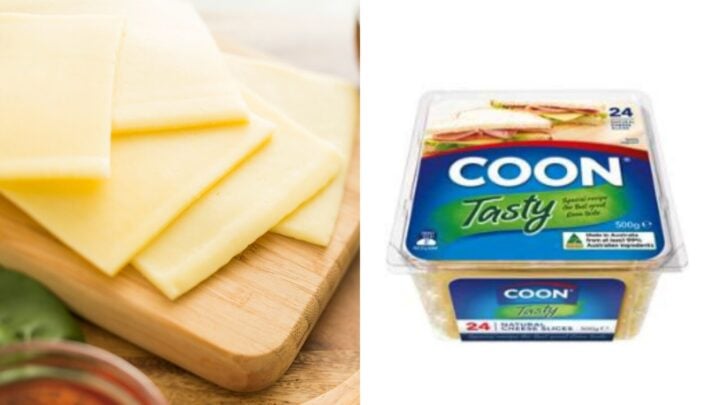 Coon cheese is now set to be renamed following calls for the controversial brand name to be dumped. Saputo Dairy Australia, who owns Coon cheese, said in a statement on Friday that after careful consideration they’ll be renaming the popular Aussie cheese.

“At Saputo, one of our basic principles as an organisation is to treat people with respect and without discrimination and we will not condone behaviour that goes against this,” Saputo said. “As such, we performed a careful and diligent review of a sensitive situation involving one of our brands. We wanted to ensure we listened to all the concerns surrounding the COON brand name, while also considering comments from consumers who cherish the brand and recognise the origin of its founder Edward William Coon, which they feel connected to.

“After thorough consideration, Saputo has decided to retire the COON brand name. We are working to develop a new brand name that will honour the brand-affinity felt by our valued consumers while aligning with current attitudes and perspectives.

“We believe we all share in the responsibility to eliminate racism in all its forms and we feel this is an important step we must take to uphold this commitment.”

The name change comes after Australian comedian Josh Thomas called out the brand name earlier this year. Despite being named after American inventor Edward William Coon, who patented a unique ripening process that was used to manufacture the original cheese, the comedian argued that the name is offensive and disrespectful toward Indigenous Australians and should, therefore, be changed. The word is an extremely offensive slur when used to describe a black person.

Many Twitter users were quick to comment on the name change, with @scottgumbleton saying: “Bulls**t. Who accepts Coon as a brand name now? Doesn’t matter if it was named after someone 100 years ago… the term is racist and offensive and has NO relevance to the person it was named after anymore.”

However, others didn’t see the point of renaming the popular cheese, with @rolfey79 commenting: “I hope people boycott their products if they change their name. I certainly will.”

Meanwhile, @millpop2 added: “It will always be known as COON cheese to me. One of my mate’s surnames is Coon does he have to change that?” And @screengrip argued: “Here we go again, now it’s cheese, next it will be the blackboard, black-tie dinners, white Christmas, black label whiskey, the White House, tanning lotion, blonde hair.”

What are your thoughts on this? Do you think the name should be changed?