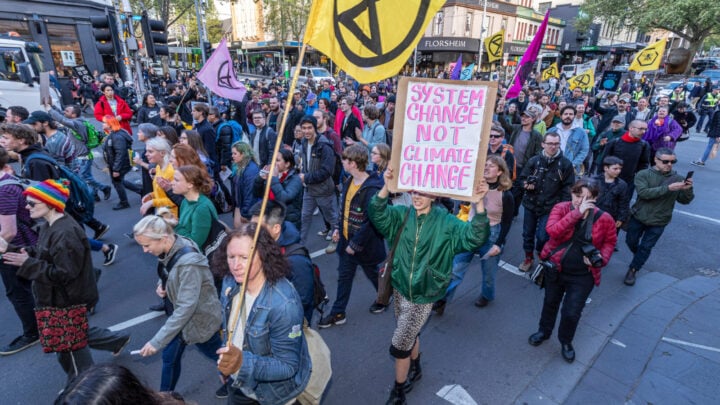 There's fresh calls for climate change education to be part of the curriculum in schools across the globe. Source: Getty.

Climate change education, including lessons on how to protest, could soon be compulsory in schools around the world.

Delegates are expected to discuss the idea at the UN climate summit in Glasgow, United Kingdom in November this year, and if approved, it would be incorporated into the Paris Agreement – the legally binding international climate change agreement Australia adheres to.

“A climate-educated and environmentally literate global public is likely to be better placed to take part in the green jobs revolution, make better sustainable consumer choices, become the next generation of sustainable entrepreneurs, and hold leaders to account,” the organisation said in a statement in December last year.

The proposal comes more than a year after thousands of school-aged children around the world played hooky to march in a climate change protest inspired by Swedish teenager Greta Thunberg.

EarthDay president Kathleen Rogers said the need for climate and environmental literacy has never been greater. “We are at a critical crossroads in terms of the earth’s timeline for restoration,” she said in a statement.

“Climate education will prepare youth across a range of positive fronts — from stimulating a rapidly growing global green economy to holding their officials accountable. Indeed, I am convinced that competitiveness in the 21st century will increasingly be linked to the quality of environmental literacy among a nation’s citizens.”

Haldis Holst, Deputy General Secretary of Educational International, said teachers are reporting that many young pupils are showing signs of fear and of anxiety about their futures and that climate education would equip them with the tools they need to solve the climate change crisis as they enter the workforce.

Australians have since taken to social media to weigh in on the topic, with some saying it’s “a step in the right direction”. Another commented on Facebook: “That’s Awesome. It’s best to be informed!”

However, others weren’t as impressed with the proposed initiative, with one writing: “So, like history, activism lessons will be biased to the left, with the intention of brainwashing the kids! Shameful!”

Another added: “Would debate be allowed? I know there are teachers who send kids out of class for disagreeing in questioning what they are taught.”

While a third wrote: “How about ensuring that the kids have competent literacy and numeracy skills, and a grasp of history. Then maybe there’s time to teach ecoterrorism.”

What are your thoughts on this? Do you think it's a good idea?