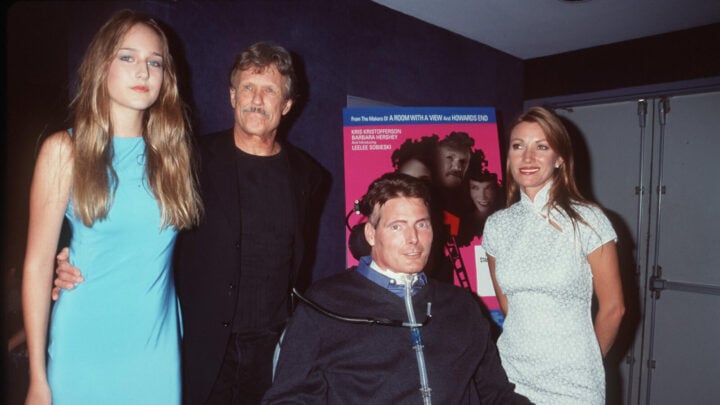 Despite Seymour's heartbreak and the couple's short-lived love story, the co stars have remained close friends since. Source: Getty

Jane Seymour, 67, has revealed she “fell madly in love” with co-star Christopher Reeve whilst filming the 1980 romance hit Somewhere in Time.

Speaking to TCM host, Alicia Malone, Seymour made the surprise confession, admitting she and Reeve had tried to be as discreet as possible about their offscreen romance.

“Well, here comes the story that I’m officially telling you now, because Chris and I, when we made the film, we literally fell madly in love,” Seymour revealed.

The iconic actress went on to admit her supposed fictitious love affair with Reeve in the film was in fact, the real deal.

“When you see this film, you will see the real thing. But we didn’t let anyone know. So a few people who worked on the show kind of sussed it out, but we were as subtle as we could be about it,” she said.

Seymour then recalled the day that her passionate experience with Reeve came to an end after he revealed to her his ex-girlfriend was pregnant.

“We were both single; it was a fantastic, amazing experience. And then one day I came to work [to film] one of the biggest scenes in the movie…Just before that, Chris had had an earlier call and I came in about half an hour later, and they said, ‘Chris needs to talk to you about something’. I thought, ‘That’s really odd, we’ve had a long time to talk about things, so what could it be?'” said Seymour.

“It was that he was about to have a baby, and that his ex-girlfriend hadn’t told him, and that she’d just announced it to the world,” Seymour continued. Reeve’s ex, Gae Exton, was pregnant with their son, Matthew.”

Seymour admitted the untimely news had broken her heart but that she was forced to remain strong in order to get through the day’s filming. It was this same day that the loved-up co-stars would film the scene where “Elise is deliriously in love with Richard after they’ve made love for the first time”, as revealed by EW.

“I then had had to put my big-girl pants on,” said Seymour.

Despite Seymour’s heartbreak and the couple’s short-lived love story, the co-stars remained close friends. Reeve went on to have a second child with his same ex-girlfriend and Seymour ended up naming her own son, Kristopher, after Reeve.

“The good part of the story is that Chris went on to have these two beautiful children and we met one another on many occasions,” said Seymour.

“We remained really, really close friends, literally until the day he died. I have to believe that I will one day see him somewhere in time.”