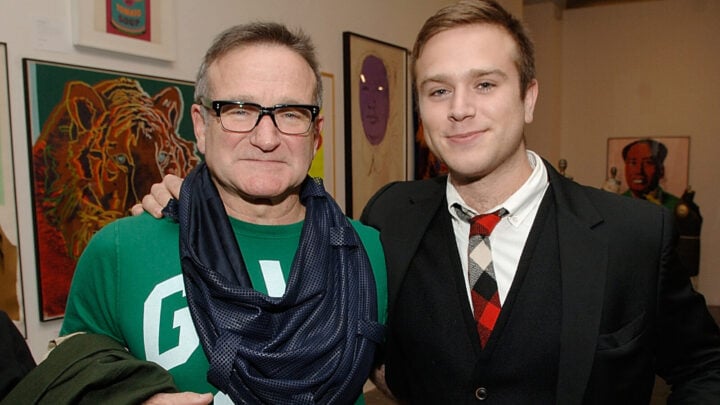 Robin William, who's pictured here with his eldest son Zak, took his own life in August 2014. Source: Getty

It’s hard to believe next month will mark seven years since we lost comic genius Robin Williams. The comedian, who would’ve turned 70 on Wednesday, took his own life in August 2014.

Zak, the eldest son of the late actor, has now opened up about the months leading up to his father’s death, saying “he was very uncomfortable”. “What I saw was frustration,” the 38-year-old father-of-two revealed on American television personality Max Lugavere’s podcast The Genius Life, People magazine reports.

“What he was going through didn’t match one to one [with what] many Parkinson’s patients experience,” he said, making reference to his father’s misdiagnosis. “So, I think that was hard for him.”

Robin had been incorrectly diagnosed with Parkinson’s Disease, but it was later revealed after his death that he had been suffering from a rare brain disorder called Lewy body disease, a type of progressive dementia that leads to a decline in thinking, reasoning and independent function.

His son continued: “There was a focus issue that frustrated him, there were issues associated with how he felt and also from a neurological perspective he didn’t feel great.”

Zak also opened up about the harsh medicines his father had to take, explaining: “Those drugs are no joke. They’re also really hard on the mind and the body.

Thinking back to his father’s last two years, Zak explained: “It was a … I don’t want to say it was a short period. It felt a lot longer than it actually was because it was a period for him of intense searching and frustration.”

In 2018, Robin’s first wife Valerie Velardi and the mother of Zak spoke out for the first time since his death, revealing how she had to tolerate his infidelities during their 10 year marriage.

Valerie, shared her story in a documentary Come Inside My Mind, claiming he couldn’t resist straying with different women at the time.

The former couple first met in San Francisco in 1976. Robin was bartending at the time, and Valerie revealed they fell for each other straight away. However, it wasn’t to last as Robin left Valerie 10 years later for their son’s nanny Marsha Garces, who later welcomed his other two children Zelda and Cody. They split in 2010.

What are your memories of Robin Williams?