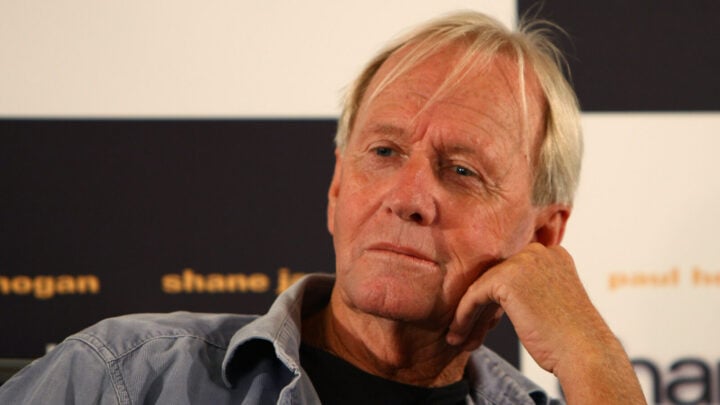 After remaining in shape for most of his life, Hogan revealed it was troubling when his health started going downhill. Source: Getty Images.

Crocodile Dundee star Paul Hogan has revealed he has been left feeling “feeble” after suffering an ongoing health battle.

In an interview with A Current Affair, the 83-year-old revealed to Tracy Grimshaw that he has battled with retroperitoneal fibrosis.

According to Healthline, the rare condition “occurs when excess fibrous tissue develops in the space behind your stomach and intestine called the retroperitoneal area”.

“This often causes compression and blockage of the ureters, which are the tubes that carry urine from your kidneys to your bladder,” Healthline explained.

Hogan spoke of how the condition and the treatment caused his muscles and body fat to deteriorate, forcing him to rely on his son, Chance, for help.

Hogan’s recent health woes aren’t the only challenge the Aussie icon has been forced to navigate after he recently revealed that he has been “homesick for years” and is unable to make the move back to Australia.

Hogan moved to the US with his ex-wife in the 90s and has resided there for over two decades. However, the Australian icon has admitted that he misses the “ambience” and “laid-back” nature of the country he once called home which has left him eager to return to home soil.

“I’ve been homesick for years,” he told The Daily Telegraph.

Hogan then revealed he is unable to make it back to Australia because of his son but that he hopes he can make it home someday soon.

“I’d rather be there, but I have my last child [Chance] who is an American – he only has me, whereas my tribe at home, they’ve all got each other,” he said.

“Then the years have slipped by, and I’m sort of stuck here.

“I’ve got 10 grandchildren and they are all adults – but for Chance, the only family he’s got is me. All his friends, his band, musician mates, girlfriends, everything – they’re all American.

“So I’m hanging in there a bit longer, but eventually I’ll get back.”