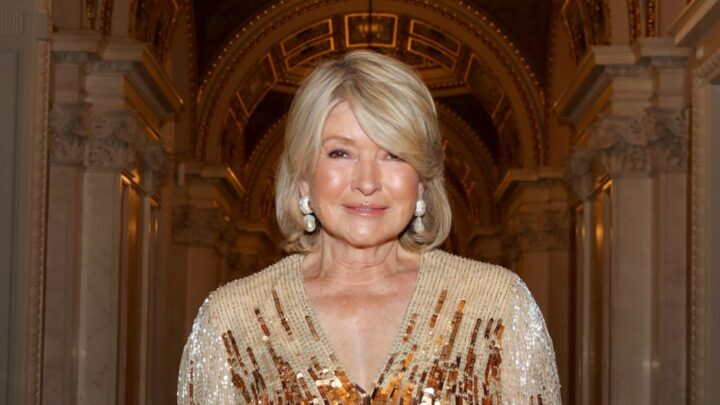 If there’s anyone who knows how to host a party it’s Martha Stewart.

The lifestyle guru and crafting queen took to Instagram on Wednesday, August 3, to share a radiant selfie to celebrate her 81st birthday.

Dressed in a khaki button top, the home culinary maestro snapped a pic of herself with slightly pouted lips, lying down, her short blonde bob falling away from her face.

“Birthday selfie [prior] to big bday dinner,” Stewart captioned the photo, which she took after a “delicious lunch” spent drinking Martha Chard her collaboration wine with Australian brand 19 Crimes.

Stewart looked as radiant as ever in the snap, opting to compliment her plump and smooth skin with a very natural make-up look.

Her skin was glowing with a subtle bronze flush over her cheeks while she used brown eyeliner to give more definition to her eyes. Stewart then topped off her look with a swipe of sheer frosted pink lip gloss.

Fans were quick to rush to the lifestyle influencer’s comments, flooding the post with well wishes and compliments on her youthful glow.

“Day drinking is hard, but I hope you continue to have a fabulous birthday! You deserve the best! Thank you for being such a great role model!”, one user wrote.

“Happy birthday Martha! It’s an absolute pleasure to walk the earth during the same time as you,” another said.

While another wrote: “Beautiful! Happy Birthday!! We all need your beauty secrets! You look AMAZING”

This isn’t the first time one of Stewart’s selfies has caused a stir on the internet.
Back in 2020, Stewart sent fans into a frenzy with a sexy photo of herself taking a dip in the pool.

The photo was met with an outpour of support from her fans, with some calling the shot a “thirst trap”.

“I just thought I looked great coming out of the pool,” Stewart said of the pic.

“My camera came on backwards, you know, selfie mode, and I looked so nice. The sun was on my face. I thought, ‘Oh, that looks pretty,’ so I took the picture. It looked good.”

Stewart’s most recent birthday selfie comes just over a month after Stewart sat down with comedian and podcaster Chelsea Handler, where she opened up about her love life and ageing.

“What’s going on in your love life,” Handler asked Stewart.

“Nothing. Absolutely, zero”, Steward replied. “I had two mad crushes in the last month, which is really good for me. But turns out one of them is married to the mother of some friends of mine. He’s so attractive.”

The lifestyle mogul then went on to admit she doesn’t think about age or ageing.

“Some things happen to you, you know, you step in a hole and you rupture your Achilles tendon. I did that last year and that was a stupid thing because it’s hurt me for a year … the least favourite thing is getting into any kind of pain,” Stewart said.

“My favourite thing about getting older is absolutely not one thing.”

In another interview with Yahoo! Life back in April, Stewart cited her glowing youthful demeanour to regular doctor checkups and believes living on a farm has helped her lead a healthier lifestyle.

“I have my regular checkups; they’re on the calendar at least six months in advance. I eat extremely well,” Stewart said.

“I live on a farm, which I think is one of the healthiest lifestyles there is because when I get up in the morning, I can go outside and breathe fresh air.

“I can plant some flowers or pick some vegetables and make a green juice that is utterly delicious, which really helps with the maintenance of good skin, good hair and strong bones. It’s just important for me to look good and feel good. My career requires it.”