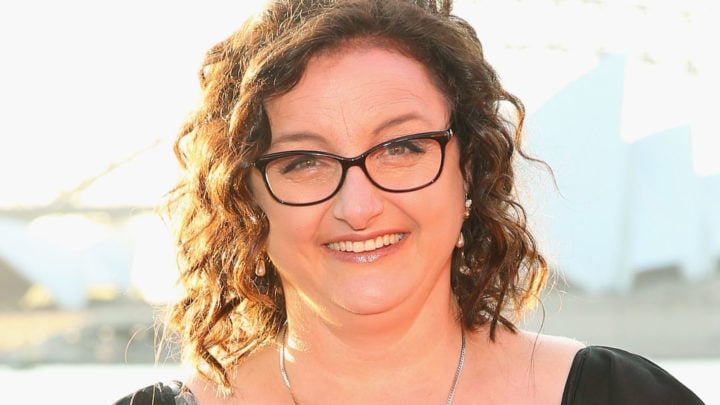 Julie Goodwin jumped on the bandwagon and answered a rather saucy viral question on Twitter. Source: Getty.

Julie Goodwin stunned her followers this week as she gave a rather rude answer to an X-rated question that was doing the rounds on social media.

The 49-year-old hopped on the bandwagon and offered up a cheeky double entendre in response to the question: “What’s something you could say both during sex and while cooking?” The saucy question was posted by Twitter user Lina Lundin and more than 14,000 people have shared their rather risque responses.

But Julie’s answer left her followers claiming she had “won the Internet” with her naughty answer, as she tweeted: “If a skewer comes out clean, it’s ready to eat.”

Julie’s followers couldn’t believe their eyes, with one writing: “This wins the Internet today!” Another commented: “Brilliant! Spat out my drink reading this.” While another responded to the post and said: “Julie you little vixen! Love it!”

If a skewer comes out clean, it’s ready to eat https://t.co/PpJ3VqZnE9

The innuendo question has been doing the rounds on social media since Wednesday and many people have offered up their own tongue-in-cheek responses, and plenty of double entendres. One user joked: “Is it meant to be that colour?”

Another user suggested: “Are you allergic to nuts?” While another joked: “Well, at least try it before you say you don’t like it.”

Earlier this year, Julie opened up about her mental health for the first time since leaving a mental health facility, revealing that she has hope for the future thanks to the support of her loving family. In February the former MasterChef Australia winner shared the heartbreaking news that she was receiving help as an in-patient.

In an interview with The Project in April, the mother-of-three shared further details about her battle, revealing that at one stage she even struggled to feed herself. Reflecting on her private pain and the five weeks she spent in a mental health unit, Goodwin told host Lisa Wilkinson that she was “going well” and her health has progressed in leaps and bounds.

“It wasn’t just a feeling, it became physical,” she said at the time. “My hands shook so much that I couldn’t put a fork full of food to my mouth. It was really quite frightening. I couldn’t sleep.”

Are you a fan of Julie Goodwin?