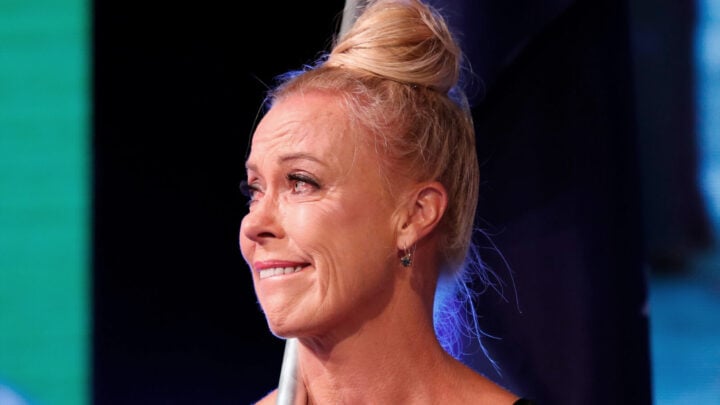 Lisa Curry has broken down on 'The Morning Show'. Source: Michael Willson/Getty

Lisa Curry has broken down when asked about her deceased daughter Jaimi, while appearing on The Morning Show today.

The 59-year-old former Olympian began to sob when hosts Kylie Gillies and Larry Emdur gently probed Curry about the loss of her daughter in September 2020.

“So many people, including other mums, are able themselves to relate to how you feel?” questioned Gillies. Curry started to respond, then paused in an attempt to retain her composure. Failing, a clearly distraught Curry let tears fall from her cheeks, as she waved her husband Mark Tabone onto the screen to comfort her.

“The reason why I haven’t said anything is because I can’t, because this happens,” Curry sobbed.

“It’s been really, really hard and people have been really supportive. I think what I’ve learnt most is that every second person walking along the street is going through the same thing.

“It’s really important to be empathetic of people and be kind to people and know that people walking around feeling like this all the time, but people don’t know about it.

Speaking of her children and grandchildren, the gold medallist shared: “The little boys Flynn and Taj, they keep me occupied, I was babysitting them last night, so that was really nice.

“(Ex-husband) Grant’s good except, you know, he’s struggling a lot as well,” she revealed.

Speaking about how she has managed to cope with the sudden death of her daughter Jaimi, and finding a way to look toward her 60th birthday next year, Curry said: “I did start a book 12 years ago and I just put it on the shelf, I didn’t feel like I had done enough, I didn’t feel ready to do it at that point.

“It was a difficult process to write the book, to go back through your memory and try and remember all the little details and the people who made a difference in my life.

“I wouldn’t say I’ve thrown myself into my work during this time, getting out of bed is probably the best thing that I do every day.

“Working behind the scenes, not being so public, that’s probably been the best thing for me.

“Our online Facebook groups we have over 500,000 women that we talk to every single day.

Mark’s shirt provided some much-needed comedic relief throughout the sad moment, however, with both Lisa and The Morning Show hosts laughing as it disappeared into the greenscreen, leaving just Mark’s floating head and arms.

You can watch Curry’s interview here:

Lisa Curry reveals how her family has supported her following an emotional 15 months as she looks forward to the release of her memoir on her 60th birthday and also speaks about her new skincare range, Happy Skin by Lisa Curry. pic.twitter.com/SECM40K9gm