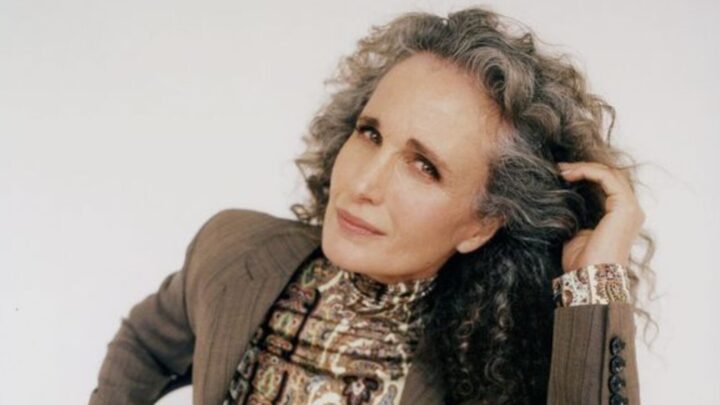 Since debuting her naturally greying hair on the red carpet at the Cannes Film Festival back in 2021, Andie MacDowell has not once considered redying her hair again, admitting she feels much “more comfortable” with her natural look.

In a recent interview with UK publication The Sunday Times, the 64-year-old actress spoke about embracing her natural hair and revealed her decision to go grey was simply because she wanted to look her age.

“People kept saying to me, ‘It’s not time,’ but I disagreed,” she said.

“I was kowtowing to everybody else’s beliefs, but I truly want to be where I am and look my age.”

Despite wanting to embrace her natural hair colour, those close to her “strongly advised again it”.

“My managers had actually said to me, ‘It’s not time [to go gray],’” MacDowell said.

MacDowell admitted to contemplating using wigs to try and hide her natural hair, but in the end, she took the plunge to go grey and was flooded with positivity and support.

“‘I was relieved people weren’t cruel. They could have been mean to me. But everybody was very loving and kind and I was relieved because I really like it. I feel more comfortable,” she said.

MacDowell first started referring to herself as a “silver fox” in February 2021 after choosing to grow out her grey hair during quarantine.

“I wasn’t colouring my hair … and you could see my roots, and my daughters kept telling me that I looked badass. And that idea that I could look badass really appealed to me,” she said during an appearance on The Drew Barrymore Show at the time.

MacDowell also shared how going grey has made her eyes look greener and has “made them pop in a way they didn’t before”.

Embracing her silvery locks is also having a positive effect on her romantic life, the actress declaring that dating has been “better.”

“I might have looked younger and more acceptable to someone before, but I want to be appreciated for where I am, for my age. And the response from men has been, ‘You look beautiful,’” she said.

This isn’t the first time MacDowell has spoken about going grey, the actress once said growing out her natural hair was a”power move”.

“Once I did it, it was just so clear to me that my instincts were right because I’ve never felt more powerful,” she said.

“I feel more honest. I feel like I’m not pretending. I feel like I’m embracing right where I am. I feel really comfortable. And in a lot of ways, I think it’s more striking on my face. I just feel like it suits me.”