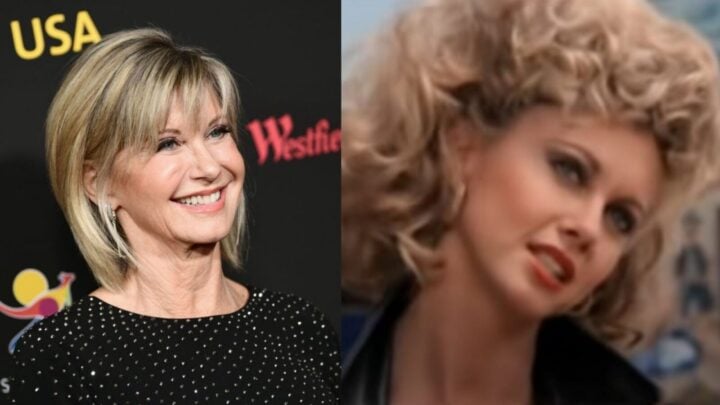 Olivia Newton-John starred in the film as Sandy. Source: Getty/Youtube.

Olivia Newton-John has been forced once again to defend the iconic 1978 film, Grease, which shot her to stardom, against claims that the film is ‘sexist’. The Australian-born actress appeared on the British talk show Loose Women on Monday to discuss her role in the film as leading lady Sandy who undergoes a raunchy makeover to impress her love interest Danny who was famously played by John Travolta, 66.

Olivia, 72, insisted that the film is based on a “fun story” and said she has never taken the constant criticism about the plot too seriously. In defence of the film, she also noted that while Sandy changes her persona to impress Danny, Danny also does the same thing at the end of the film.

“I know there were some criticisms about me wanting to change to be like him but they forget that he wanted to change to be what I wanted,” she said. “It’s a movie and it’s a fun story and I have never taken that too seriously.”

But when questioned by the panel about whether the film would still work in today’s standards where such a spotlight has been shed on sexism in the industry, Olivia candidly said: “I don’t really know”.

In the classic film, Olivia and John star as two loved-up teenagers in the 1950s who meet during a summer fling before being reunited at high school and attempting to rekindle their romance despite coming from different groups. Critics of the film say they have an issue with the final scene of the movie in which Sandy, who originally appears as a prim and proper school girl, shows up in a saucy skintight black catsuit and leather jacket to win over Danny.

However, Olivia insists people forget that at the end of the film, Danny, who originally appears as a tough greaser, shows up dressed as a jock in an attempt to win over Sandy.

The debate of sexism in the film has been around for a while however it’s recently started to gain more traction since the #MeToo movement which has worked towards shining a light on women who are wrongly portrayed or treated unfairly in the movie industry in particular.

Those who argue the film is in fact sexist also mention the emphasis the T-Birds’, who are the main gang of greasers, put on having sex with their girlfriends. This is highlighted in the questionable lyric from the popular song ‘Summer Nights’ in which they sing: “Did she put up a fight?” which some have said could be linked to sexual assault.

Despite these claims, Olivia has long been in support of the film saying to the panel that she was unaware of how popular the musical comedy was going to be adding that she was “pretty lucky” to be included in something so big.

“I don’t really think anyone had a clue. I mean, the stage show had been a huge success for a long time so there was a lot of talk about the movie and it was a very popular show. Nobody could have imagined the success the movie has enjoyed, especially all these years later – 41 years later and people are still talking about it! It’s pretty amazing, I’m pretty lucky.”

Do you think the movie is sexist?