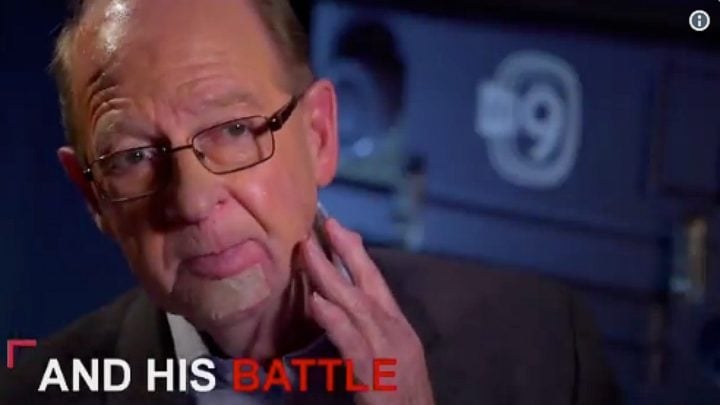 Legendary TV and radio star John Blackman has opened up about his “life-changing” cancer battle, claiming the ordeal has made him realise that the world is much bigger than work and his career.

In a chat with 3AW on Wednesday the Hey Hey It’s Saturday star claimed his life truly “changed forever” after his cancer diagnosis, which last year saw him have his whole jaw removed in a bid to stop the disease spreading.

John revealed in a heartbreaking interview with A Current Affair in September 2018 that he had been secretly battling cancer, with it slowly spreading around his mouth and into his jaw bone. Just days later he underwent a gruelling 11-hour operation to remove the aggressive cancer.

Now months later, the 71-year-old has shared some good news, claiming as far as he’s aware he’s in full remission. However, John said life hasn’t been easy period post-op as he has been forced to put his life and love of presenting on hold.

“It’s like I ploughed into a tree and my life changed forever,” John told host Neil Mitchell. “When I was given the news, my first thought was ‘I’ve got a full diary full of corporate gigs, I’m going to have to ring them all and put them on hold.”

As part of the procedure John had his teeth removed, his fibula redesigned into a jaw, and a skin graft from his inner thigh used to replace a section of his chin. For someone who relied on his voice for work, the talented Aussie said it’s been a difficult adjustment period.

“I’ve discovered my voice doesn’t have any authority anymore,” he joked to Neil. “I sound like a very drunk uncle Arthur when I’m on the phone. I don’t get any respect as (people) assume I’m a drunk or an old fool.”

John added: “I’ve got a new appreciation for someone who looks different and sounds different.”

But according to the presenter, the cancer hasn’t stopped his career altogether as he plans to get back into things as soon as possible.

“My working career stopped the day I went into surgery and I’m determined to get it back on track,” he explained. “In the words of Arnie – I’ll be back.”

John has worked in radio since 1969 but is best known for his 28-year stint on Hey Hey It’s Saturday.

Were you a fan of Hey Hey It’s Saturday? Do you have a message for John as he continues his recovery?