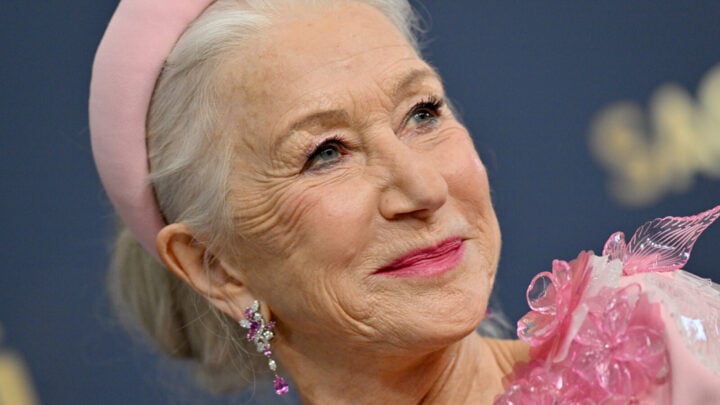 The 76-year-old Oscar winner told the publication she was “gobstruck” to be asked to be on the cover of the magazine.

“I was absolutely sort of gobstruck, as we say in England. I never considered myself ‘beautiful.’ And [at] my age! So I was amazed,” Mirren told the magazine.

The Queen actress who is a L’Oreal Paris spokesperson, says she wants the word “beauty” to be changed to be more inclusive of those who feel they don’t qualify as beautiful.

“Don’t get me wrong — I love beauty and I love looking at beautiful things. But I don’t like the word beauty [as it’s] associated with the beauty industry — makeup and products, skincare and all the rest of it — because I think it excludes the vast majority of us who are not beautiful,” she said.

“I love the word swagger because I think swagger means I’m confident in myself, I’m presenting myself to the world, I’m enjoying the world around me.

“I think what is called the beauty industry should be called the swagger industry. We’re giving people swagger.”

Mirren says ageing has had a positive impact on her perspective of life.

“And one of the advantages is that you literally get to be wiser. Life is a constant process of learning.”

The star says she “still gets nervous” before filming, worried about meeting new people and forgetting her lines.

“I just get very frightened until I get into the swing of things and then I kind of relax,” Mirren said.

Dame Mirren’s most recent film was The Duke, a movie that tells the true story of Kempton Bunton, a 60-year old taxi driver, who stole Goya’s portrait of the Duke of Wellington from the National Gallery in London.

Mirren plays “working-class woman” Dorothy Bunton, whom she says she surprisingly has a lot in common with.

“Dorothy was somewhere in my DNA,” she said.

“When I was growing up in a working-class family in London, I had a lot of aunts, as my mother was the thirteenth out of fourteen children. My mother also left school at the age of fourteen or fifteen to work. I liked her and wanted to play her.”