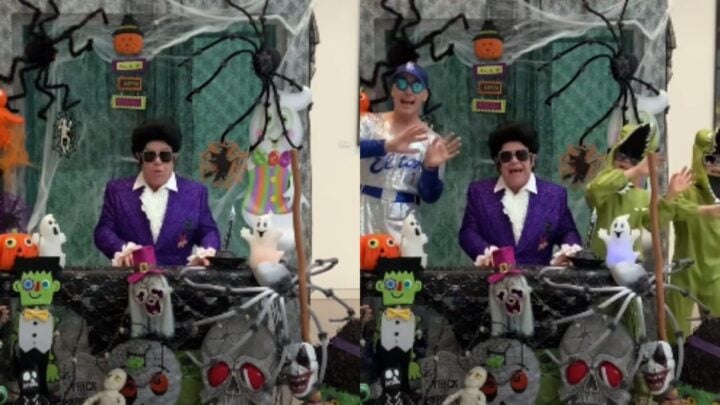 Elton John, David Furnish and their two sons Zachary and Elijah rocked out to 'Crocodile Rock' in a hilarious video. Source: Elton John/TikTok.

Elton John may be 73 years old, but the singer-songwriter has proved he still has his finger on the pulse. The English singer took fans by surprise this week after he uploaded a TikTok video of himself, husband David Furnish, 58, and their two sons Zachary, nine, and Elijah, seven, rocking out to ‘Crocodile Rock’.

“Crocodile Rockin’ is something shocking… Happy Halloween!” he captioned the short clip.

In the video, Elton can be seen playing the piano, while dressed as Elvis, sporting a purple blazer, ruffled white shirt and black wig. David, Zachary and Elijah can then be seen popping into the screen, with David sporting Elton’s iconic Dodger Stadium baseball kit costume, while the couple’s two sons are dressed as none other than crocodiles for the hilarious Halloween skit.

Elton didn’t skimp on Halloween decorations either, as the set was decorated with large cobwebs and spiders, skeletons, pumpkins and ghosts.

Many fans were quick to comment on the one-of-a-kind video, with one writing: “The King has arrived.” Another added: “Omg awesome setup.” While a third wrote: “Omg I love this man.”

The post comes just a few days after the ‘Rocket Man’ singer took to Instagram to wish his husband a very happy birthday.

“Happy Birthday to my wonderful husband @davidfurnish,” he wrote alongside a lovely picture of the pair. “Love you with all my heart. Thank you for everything you do.”

It also comes a few weeks after Elton and his ex-wife Renate Blauel settled a legal case. Renate, whom Elton famously tied the knot with in Sydney, Australia in 1984, was suing the singer for £3 million (AU $5.3 million) amid claims he broke the terms of their divorce deal. According to The Sun, the former sound engineer was suing after he wrote about their short-lived marriage in his 2019 memoir Me.

According to The Guardian, a representative for Elton released a short statement saying the dispute had been settled.

“The parties are happy to announce that they have resolved this case, in a way that acknowledges Renate’s need for privacy,” the statement said. “For her part, Renate acknowledges that Elton has acted in a dignified and respectful way towards her in the last 30 years and has always been happy to help her.

“They will not be discussing each other, or their marriage, in future and will be making no further comment about the case.”

Did you enjoy the video?