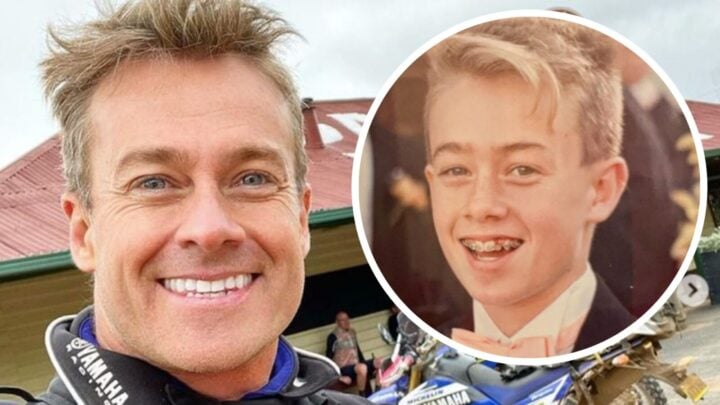 It’s hard to imagine famed television personality Grant Denyer going through an awkward childhood phase but his recent throwback photo, with his braces, blonde floppy fringe, and ’80s tuxedo, proves that we’ve all rocked some silly looks in the past.

Taking to Instagram on Tuesday, December 20, the former Sunrise presenter left fans and followers in fits of laughter after sharing an iconic childhood photo.

“You think it’s not possible to have a fringe, flat top, braces AND a ‘rat’s tail’ at the same time”

“And it was glorious.”

Shortly after sharing the shot, Denyer’s post was flooded with hilarious comments from friends and fans, all of whom playfully poked fun at the Aussie celebrity’s looks.

“Bahahahhahaha I love this photo.. unsure about the rats tail to be fair,” Denyer’s wife, Chezzi wrote.

“Damn Denyer, save some babes for the rest of us!!” a fan wrote.

“Business at the front, party at the back….and sides….and top,” commented another.

“Ooof that’s a whole lotta woosho you got goin there. Legend in the lunchbox trophy for you”

“……And you’ve never looked better! Love you, Grant Denyer, you are a crack-up and a half.”

The lighthearted post comes a couple of weeks after the 45-year-old opened up about his health crisis during his appearance on the Along For The Ride podcast.

Denyer revealed that while working as a presenter on Sunrise was the “greatest” time of his life, his hectic work schedule eventually caught up with him and he was delivered a grim warning by doctors to change his lifestyle.

“I wasn’t listening to my body; I had massive chronic fatigue,” Denyer said.

“There was a point there where I went to the doctor and they examined my organs and tested them all and said they were running at about seven per cent.

“And they said, ‘if you don’t do something, drastically, you’re going to die, and soon.’

“That’s when I was like, holy sh**, this is serious, I need to do something about this.

“I was trying to push on and I realised I just had to give in to it – forget about television, forget about success, forget about ratings – and just focus on my health because it wasn’t going to end well.”

Denyer eventually heeded the warning from doctors and took a break from his fast-paced lifestyle to focus on his well-being but admitted that he “had to do a fair bit of work” to get his health back on track.

Denyer’s most recent health admission comes after the television personality opened up about his struggles with alcohol and his experience with anxiety while appearing on the reality series I’m a Celebrity Get Me Out of Here in 2021.