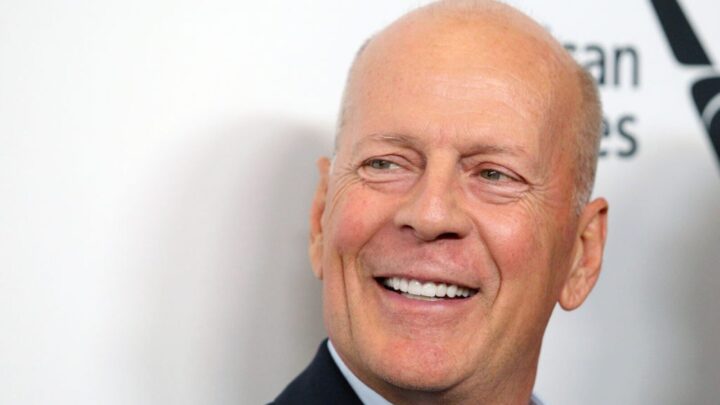 Bruce Willis was diagnosed with aphasia earlier this year in March. Source: Getty

Shot at the iconic fictional setting of Nakatomi Plaza, where McClane vowed he’d “never even think about going up in a tall building again”.

Now, 34 years later, Willis has broken his character’s promise, returning to the site to stand atop the building once more and there’s even footage from the nostalgic trip.

The emotional moment was captured by Willis’ wife, Emma Heming Willis, and shared on her Instagram account.

The black and white video shows the 67-year-old screen icon standing at the top of the building, leaning over the railings, looking over his surroundings while the wind blows by.

The video then cuts into numerous shots of Willis in the film, prompting an outpour of warm and fuzzy feelings of nostalgia for Die Hard fans.

“Can’t believe I was 13 and he was my idol…Bruce still is my #1 forever. I’ve watched every movie and even have his cassette tape “UNDER THE BOARDWALK,” one user commented.

“A classic! Beedub took off and never looked back…. and we are all happy he did!” remarked another.

Willis retired from acting earlier this year in March, after the devastating announcement that he had been diagnosed with aphasia, a disorder that affects one’s ability to understand and communicate.

“This is a really challenging time for our family and we are so appreciative of your continued love, compassion and support. We are moving through this as a strong family unit, and wanted to bring his fans in because we know how much he means to you, as you do to him,” his family had written in their joint statement.

Two months after his diagnosis, Willis’ wife had opened up about her recent mental health struggles after the news of her husband’s shock diagnosis of a debilitating brain disorder broke.

The 43-year-old mother of two admitted the immense amount of pressure she put on herself to take care of her family had taken its “toll” on the state of her own health.

“I put my family’s needs above my own, which I found does not make me any kind of hero,” Heming said.

“That amount of care for everyone else within my household had taken a toll on my mental health and overall health. And it served no one in my family.”

After the candid revelation, Heming admitted she was now focusing her efforts on better managing time for self-care for the sake of herself and her beloved family, including the two young daughters she shares with Willis, Mabel, 10, and Evelyn, 8.

While the couple still faces their highs and lows with Willis’ condition, the family have a firm support system and continues to make the most of sweet moments together, like their trip to Nakatomi Plaza.

Fans who’d like to rewatch Die Hard can do so on Disney+, Google Play, AppleTV, and Amazon Prime.