Too old to go nude at 56? Former top model says ‘sexy has no expiration date’ 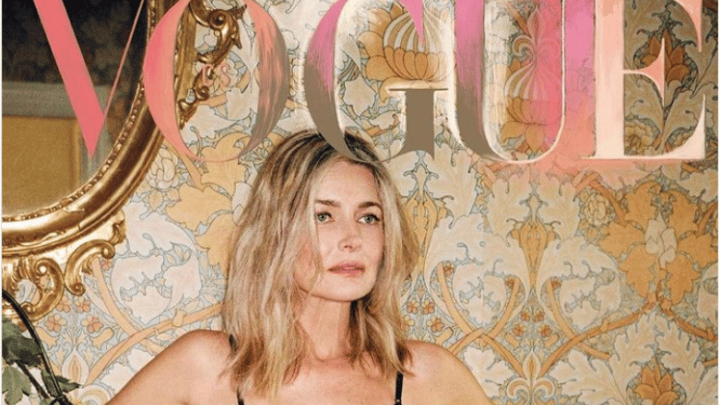 Supermodel and widow to The Cars rocker Ric Ocasek, Paulina Porizkova, has hit back at critics who suggest she’s too old to publicly show her naked body, flaunting her incredible physique in a new “full frontal” nude shoot for the May issue of Vogue Czechoslovakia.

The Czech-born Swedish model, who turned 56 on April 9, left little to the imagination in the fashion magazine’s cover shoot, marking 40 years since her first cover with the publication.

The model shared the picture on her Instagram, which shows her looking seductively into the distance wearing nothing but an entirely sheer black bodysuit, censored for Instagram with two swans covering her nipples. In the caption, she thanked the “brave folks at Vogue CZ” and joked, “for you peeps who have a problem with the lack of cover-up — you can peruse the pages fully dressed.” She concluded the post with the hashtag #sexyhasnoexpirationdate.

Porizkova is far from shy about sharing snaps of her body — or her thoughts on ageism — posting a cheeky photo on her Instagram account in February questioning the dichotomy between being naked at different ages. “When I was in my 20s and 30s, the less I wore, the more popular I was,” she wrote in the post. “In my 40s, I could walk around practically naked and illicit nothing more than a ticket for public indecency. At 50, I am reviled for it. ‘Put on your clothes, grandma. Hungry for attention, are you? A little desperate here? You’re pathetic.’

“Why is sexiness and nudity applauded in a woman’s youth and reviled in her maturity?” she questioned.

Earlier this month, Porizkova shared her thoughts on ageing and addressed critics who may have an issue with her sexy shots, saying on the US talk show Tamron Hall that the public’s general view is that women nearing middle age should not expose their bodies, while younger women are “celebrated” in lingerie.

“In my 20s, I was celebrated for showing up in lingerie,” she said. “I was getting a lot of money for it and everybody loved me. In my 50s, I still think I look pretty good in lingerie, but the reaction is reviled, obviously not by everybody, but yeah, there’s a fair amount of backlash.

Vogue Czechoslovakia also posted the image on their Instagram account, writing in the caption that the shoot was celebrating Porizkova for not fighting or being afraid of age. “The May issue of Vogue CS is dedicated to time,” it wrote. “It is not about anti-age, and we do not want to talk about ageing or blindly prefer youth. We do not perceive time as an enemy but as the only true lifelong companion. We seek the beauty of maturation in every moment of human life. We celebrate flowers in a rage even when they fade.

“@PaulinaPorizkov has her own specific view on maturation. She does not fight with age, nor is afraid of it. She doesn’t hide anything. The proof is her Instagram profile, but also the cover of our #MayIssue. She was photographed by @marietomanova in her apartment in Manhattan. Social networks forbid exposed female nipples, so therefore we had to symbolically cover them. The uncensored version will be available on news stands and subscribers will receive it.”

Do you think there's an age where sexiness starts to wane? Or should you embrace your body at every life stage?