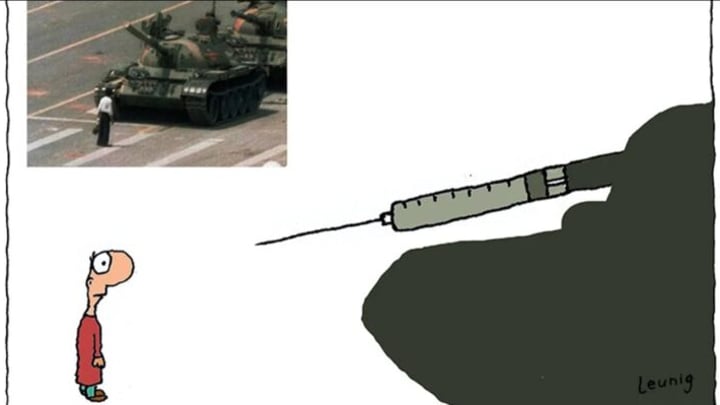 Cartoonist Michael Leunig has been fired after drawing a comparison between Tiananmen Square and resistance to mandatory vaccinations in Victoria. Source: @tim_jbo/Twitter

The five-decade-long cartooning career of Michael Leunig has drawn to an end. A cryptic statement was published in The Age last Monday October 18, 2021, saying that The Age was “trialling new cartoonists”.

Leunig has now confirmed this speculation in speaking to The Australian. “Apparently, I’m out of touch with the readership”, he said.

This axing comes after a controversial cartoon was rejected by The Age editor Gay Alcorn, and subsequently published by Leunig on his own website in late September, 2021. The cartoon (below) was a commentary on Victoria’s resistance to mandatory vaccination. The comic was ruled to be offensive, as it compared this current struggle in Australia, to the fight for democracy which led to the historic moment in Tiananmen Square. It was after this self-publication that Leunig received contact from Alcorn alerting him that his position as cartoonist had been terminated.

“It was a pretty blunt, discourteous and frustrating way to have a half-century of editorial cartooning at The Age brought to an end,” Leunig said of his dismissal.

“Gay feels this type of cartoon is not in line with public sentiment, and The Age’s readership, who it does seem are largely in favour of the Andrews Covid narrative. But my job is to challenge the status quo, and that has always been the job of the cartoonist,” Leunig continued.

Defending his use of the metaphor, Leunig said: “The Tiananmen Square image is often used in cartoons around the world as a Charlie Chaplin-like metaphor for overwhelming force meeting the innocent powerless individual. In my view, it is a fair enough issue to raise in the most locked-down city in the world.”

“If what Gay says is right, I don’t much want to work for the sorts of readers who are so censorious. It seems that at The Age in particular, you can’t go near the Covid story except in a way that’s supportive of the Victorian government’s handling of it. And if you’re not supportive, that’s reason enough for you to be cancelled.”

Leunig also claimed that he had been censored 12 times in 2021 before his axing, saying that all cartoons which were presented but ultimately not published were regarding Victorian Premier Daniel Andrews, or Covid-19.

The internet has reacted strongly in both support and opposition of Leunig since his firing, saying:

To be fair* Leunig seems to have been fairly consistently anti vax for a while including effectively mandatory vaccinations for children which have been far less controversial in the community.

*By fair I mean this is not new. Bye ML. pic.twitter.com/uV1q7wN14I

OMIGOD. How dare you sack Michael Leunig over a cartoon about Andrews under the disguise you’re trialling other cartoonists. You are as despicable as Andrews. Won’t be buying your rag anymore. @DanielAndrewsMP @theage #BanTheAge #DanNext #BanDan #MakeVicDanFree https://t.co/MY8dKsoAX5

Leunig is no longer being published in @theage because his anti-vaxxing views could not be tolerated in the middle of a pandemic – even by The Age which says a lot. It does make me happy though that Leunig seems to believe the #IStandWithDan crowd are the reason he’s been booted.

Ok, I disagree with the anti-vaxxer message of this particular cartoon, but cartoons are such a powerful medium and, as well as amusing us, they should be disturbing us. Vale, the unique and whimsical voice of Leunig.

#Leunig The cartoon would have been approved by the Editor. ????

Another insight into the future from Leunig. pic.twitter.com/AhF65GMckr

Do you think Leunig has pushed it too far?