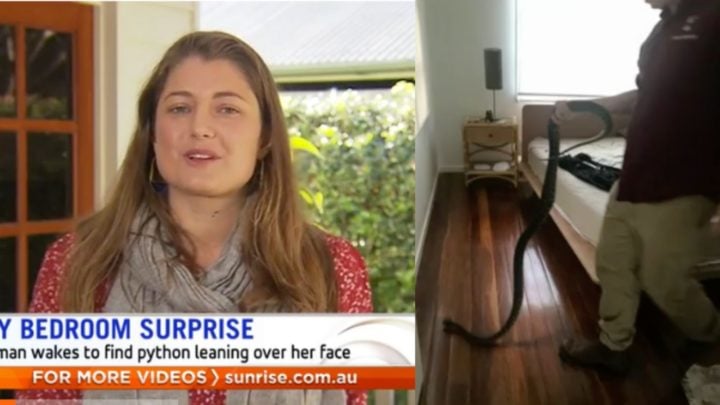 A Brisbane woman woke to find a massive python staring right in her face. Source: 7 News

A Brisbane woman has experienced what most would consider their worst nightmare, after she woke to find a massive python flicking its tongue against her face as she lay in bed.

Sally Stent thought she must have still been dreaming when she opened her eyes on a cold May morning to discover the two-metre long snake just inches from her face, 7News reports.

Sally had crawled into bed after arriving back home in the early hours of the morning, around two weeks ago, when she felt something touching her forehead. Assuming it was her hair sweeping across her face or even an ant, Sally repeatedly attempted to brush it away until finally she opened her eyes to find the reptile staring straight at her.

While many would go into a state of shock the woman claimed the surprise visitor didn’t phase her at all, revealing she sat down to enjoy a cup of tea before calling her dad for help.

Appearing on Sunrise on Wednesday morning, Sally explained she hasn’t had any nightmares since then and wasn’t at all scared by the python.

“It kind of seemed logical because it was a really cold morning,” she told hosts David Koch and Samantha Armytage. “Then the snake catcher came and I was like okay that’s kind of dealt with now.”

Sally credited her lack of fear to her childhood growing up in the bush, admitting she was confident the snake wasn’t going to harm her in any way. She claimed it was more shocking than scary and it took her a while to get herself together.

Read more: Woman finds snake in shoe after flying from Australia to Scotland

“I was so tired because I got in at 2am from Melbourne,” Sally explained on Sunrise. “I slowly pulled myself together. I knew it wasn’t going to move quickly, it was a python, so I just closed my door and walked out. I had a cuppa.”

While Sally hasn’t been scarred by the experience others took to social media to admit they wouldn’t be quite so calm if they found themselves in the same situation.

“This would actually make me have a heart attack in bed,” one person wrote on Facebook.

“I am a Queenslander and I can assure my reaction would have been vastly different to hers. I would no longer be living in that house,” another claimed.

While a third said: “Eww I would absolutely die. I hate snakes I would have to move out.”

Have you ever come across a snake in your home? What do you think you would have done in this situation?