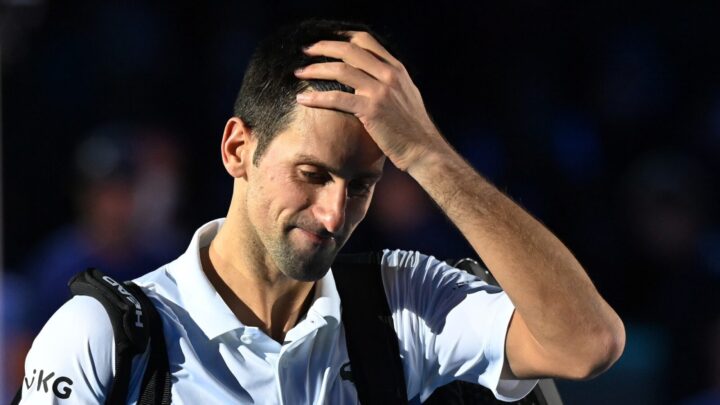 The world number one may not be let into Australia unless he can prove he's vaccinated. Source: Getty

Tennis star Novak Djokovic’s visa has been cancelled after arriving at Melbourne’s Tullamarine Airpot at around 11:30 pm on Wednesday, January 5.

The 34-year-old was due to play in this month’s Australian Open, after being granted a medical exemption to compete despite being unvaccinated.

Djokovic was told to leave the country today, January 6, but News.com suggests the tennis player may challenge the decision in Victoria’s courts.

His father, Srdjan Djokovic, allegedly told a Serbian radio station that his son was “isolated in a room” at the airport.

“If they don’t let him go in half an hour, we will gather on the street, this is a fight for everybody.”

“Just got off the phone with Novak. I told our Novak that the whole of Serbia is with him and that our authorities are taking all measures to stop the harassment of the best tennis player in the world in the shortest possible period,” Vucic said.

Vucic has vowed that “in accordance with all the norms of international public law, Serbia will fight for Novak Djokovic, for justice and truth.”

Shortly after the president’s statement, Djokovic’s visa was cancelled.

A source from the federal government told The Age the issue involved documents which required to prove the reason for Djokovic’s exemption, a requirement for all unvaccinated travellers.

Speculation of a possible issue with the visa emerged while Djokovic was in transit. There are reports implying a member of the tennis players team may have filled out the wrong visa application, which does not apply for those with vaccination exemptions.

According to Sports Net, the Victoria state government had mandated that only fully vaccinated players, staff, fans and officials will be allowed to enter the January 17 tournament.

Only 26 people involved with the tournament applied for the medical exemption, but according to Tiley, only a “handful” were granted.

Acting Sports and Major Events Minister Jaala Pulford tweeted that the Victorian Government would not be supporting Djokovic’s application.

The Federal Government has asked if we will support Novak Djokovic’s visa application to enter Australia.

We will not be providing Novak Djokovic with individual visa application support to participate in the 2022 Australian Open Grand Slam.

Australians reacted with disgust to news that the nine-time champion had been granted a vaccination exemption to play at the Australia Open.

And despite the Victorian government claiming for months that Djokovic wouldn’t be able to play without being fully vaccinated, the Serbian revealed on social media that he had been granted permission to compete.

However, on Wednesday, January 5,  Home and Affairs Minister Karen Andrews and Prime Minister Scott Morrison made remarks implying Djokovic was not yet in the clear.

Morrison was asked by reporters if he personally supported the decision granted on Djokovic, Morrison warned the tennis star could find himself “on the next plane home” if he can’t provide sufficient evidence as to why he is unable to be vaccinated.

“If that evidence is insufficient, then he won’t be treated any different to anyone else and he’ll be on the next plane home. So there should be no special rules for Novak Djokovic at all. None whatsoever. And so if medical exemptions have been provided by medical professionals and that’s been furnished to him as a proviso for him to get on that plane, well, that will have to stack up when he arrives in Australia,” he said.

Djokovic’s vaccination status had been a mystery as he continuously refuses to reveal whether he has received the jab or not, but News.com reports that the tennis star made a clear stance on the matter, saying on April 2020 he was opposed to mandatory vaccinations.