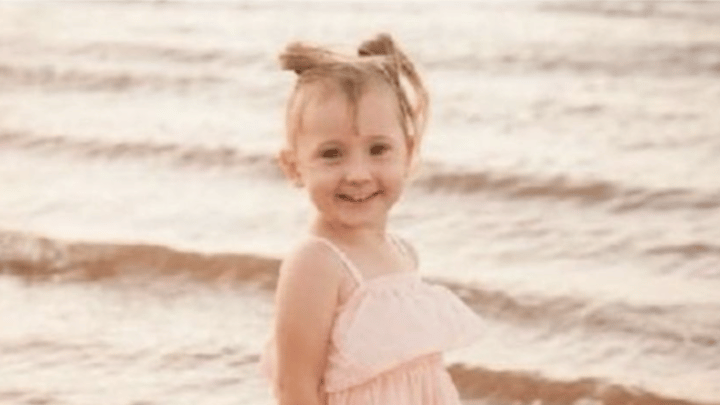 The picture from the $1M reward poster for Cleo Smith's return

“What I can say is humans, good people, put information together. And that’s what I really want to put it down to,” he said.

“I’ve been doing this a long time and we’re gonna act on it. That’s how we get results.”

WA Premier Mark McGowan acknowledged the “amazing” work of volunteers and police involved in the search for Cleo Smith in a press conference.

“Can I finally also acknowledge Ellie and Jack, Cleo’s parents, they have been through a lot of the last 18 days, terrible trauma, some vicious attack, and some, no doubt, very trying and sad times.

“To them, and all of our thoughts go to them. We’re so pleased that little Cleo has been back to them. There is an exciting, uplifting, wonderful day. I’m sure we are very proud.”

EARLIER:
Western Australia Police have confirmed four-year-old Cleo Smith has been found alive locked in a house in Carnarvon, 18 days after she went missing.

A man is being held in police custody for questioning. Police are currently combing the suburban home where Cleo was found, for evidence.

The Age reports that officers broke into a locked house in the town of Carnarvon, 900 kilometres north of Perth. The house where detectives found Cleo was located approximately 70km from the campsite where the child disappeared 18 days ago.

Deputy Commissioner Col Blanch confirmed in a statement that  Cleo was found “alive and well”.

“It’s my privilege to announce that in the early hours of this morning the Western Australia Police Force rescued Cleo Smith,” he said.

“This is the outcome we all hoped and prayed for.”

Blanch thanked Western Australian Police for their “incredible police work” during the search.

“I want to thank Cleo’s parents, the West Australian community and all of the volunteers,” he said.

“And of course, I want to thank my colleagues in the Western Australian Police Force.”

It is reported that a police team broke their way into a locked house in Carnarvon at about 1am, November 3, 2021.

“One of the officers picked her up into his arms and asked her ‘what is your name?'”

She said “My name is Cleo”.

Cleo has been reunited with her family, this morning.

She had been missing since October 16, when she disappeared from the tent she was sleeping in with her parents at the Blowholes, a popular camping site north of Carnarvon, and drew plenty of media attention.

On November 2, Western Australian Police revealed Cleo’s potential alleged abductor could have escaped from the campsite undetected as multiple escape routes that avoid CCTV cameras have been discovered in the area. CCTV footage acquired from these cameras found that her alleged abductor could have left the area without being caught on camera, as reported by The West Australian.

There has been an outpouring of relief from the Australian public in the moments since news broke that Cleo had been found. Prime Minister Scott Morrison has tweeted his thanks to those who worked on the case:

Cleo Smith has been found and is home safe and sound.

Thank you to the many police officers involved in finding Cleo and supporting her family.

November 1, WA Police tweeted, announcing their continuation of the search for Cleo.

Scott Morrison announced on October 27 that the Australian Federal Police would be assisting West Australian Police wherever they can, with the use of secret technology and intelligence methods. Speaking of Cleo’s disappearance on 6PR radio, Morrison said:

“As much as I’d love to reveal exactly what some of those are and how they’re being used, we certainly can’t talk about that on air.”

“But the AFP are there, they’ve joined that process. I’m very pleased to say that they’re helping in every way they possibly can, through their intelligence capabilities, their technology and their forensics abilities.”

“I just hope we can find Cleo, I just really do. I just think the whole nation is just waiting and hoping and praying, we certainly are.”

Cleo disappeared from the tent she was sleeping in with her parents at the Blowholes, a popular camping site north of Carnarvon, and drew plenty of media attention.

On October 26, Cleo’s mother Ellie Smith, and stepfather Jake Gliddon, made a statement publicly denying their involvement in the four-year-old’s disappearance, as they pled for the safe return of their daughter in an emotional interview.

“No way, we love our daughter and want her home,” Ellie said.

“There is no way that either myself or Jake could’ve done anything to hurt our daughter.”

“She’s been taken from our family, from somewhere she’s meant to feel safe.”

A tipoff reported on October 25, led police to change course in the investigation, and ultimately led to Cleo being found. The tip-off included information about a car that left the campgrounds at 3am, the night that Cleo went missing.

On October 20, WA Police Inspector John Munday aired concerns over the opened tent and the height of the zipper.

“The tent certainly has multiple entries,” he said.

“One of the major circumstances that has given us the cause for alarm for Cleo’s safety is the fact that one of those zippered entryways was opened.

“The positioning of that zipper for the flap is one of the circumstances that has caused us to have grave concerns for Cleo’s safety.”

Inspector Jon Munday provides an update on the search for missing four-year-old Cleo.

Cleo went missing after waking her mother at 1.30am for a drink of water. By 6am, she was gone. Now, 18 days later, she is back with her family.