‘I was so brave’: Boy, 6, tackles metre-long snake to protect little brother 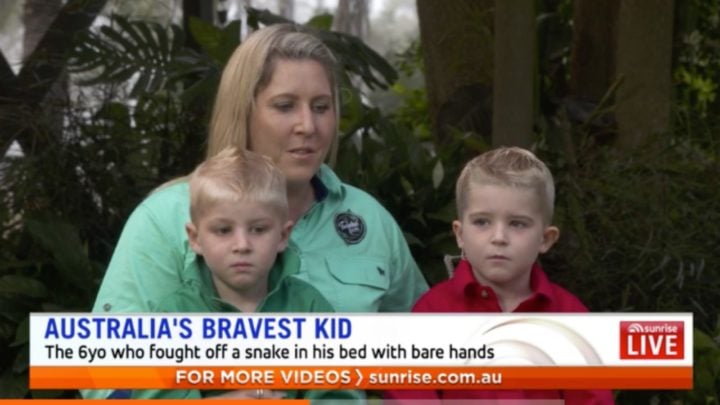 A six-year-old boy has showcased his sheer courage by fighting off a one-metre long snake after waking to find it latched onto his leg in the middle of the night.

Ben Gorman was enjoying a restful sleep at his home in Darwin on Monday when he awoke to discover the reptile sinking its teeth into his skin, 7 News reports.

But instead of going into a state of shock, as most people would, the youngster simply grabbed onto it and threw it against a mirror, before calmly going to tell his mum about the incident.

Speaking about the shocking chain of events Ben told NT News he thought it was venomous and had it get it off of him and away from his younger brother Lachy who was sleeping in the same room.

“I didn’t scream,” he told the news outlet in a video shared by 7 News. “I was so brave I could just pick it up and throw it.”

Ben continued explaining: “I woke up then I felt something biting my leg, then I got my knee up, then it was biting me there [pointing at his leg]. Then I ripped it off. I was holding onto it tight so I think I figured out it was venomous and threw it at the mirror of our bedroom.”

It was only after he fought the snake off with his bare hands that the brave boy decided to notify his mum, who quickly called triple-0. Ben was transported to hospital immediately where he was treated for not one but two snake bites from what was later discovered to be a non-venomous Slaty-Grey snake which are commonly found in the Northern Territory.

However, it turns out Ben wasn’t the only member of the family to come into contact with the slippery serpent that night as mum Micha revealed she too had felt the snake in her bed.

Appearing on Sunrise following the eventful evening the mum said she only realised later that the same reptile that had bitten her son was in her room earlier in the night.

“It was a night of events,” Micha explained. “I woke up in the middle of the night to what I thought was a sock. Then Ben came in at 4 o’clock in the morning and gently woke me up and said ‘Mum I’ve been bitten by a snake, but it’s okay, I’ve thrown it at the wall. You better go get Lochie’.”

However, the incident hasn’t seemed to phase brave Ben who claimed he wasn’t worried at all when he first saw the snake in his bed.

When asked by hosts on Sunrise if he was scared at the time the youngster simply replied: “No”.

Have you ever discovered a snake in your home? How do you think you’d react if you were put in the same situation as Ben?