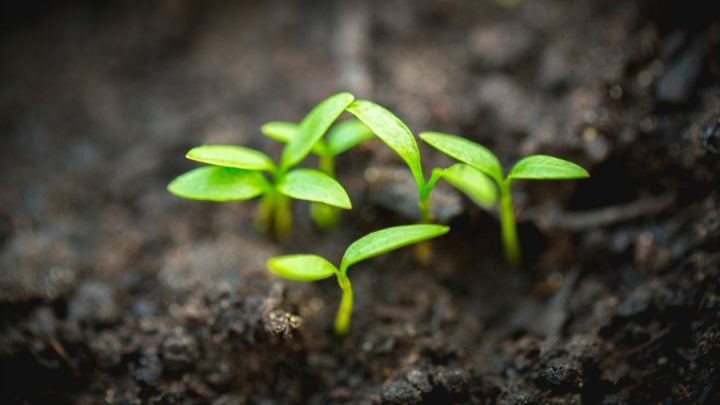 People in Washington, US, will soon be able to have their loved ones remains turned into human compost. Source: Getty

A newfangled idea to reduce carbon emissions could see people passing over traditional burials and cremations and instead opting to have their remains turned into human compost for their garden.

The state of Washington in the USA has become the first place to legalise the process of turning bodies into soil in a new environmentally-friendly burial trend, The New York Times reports.

The process works by placing dead bodies into steel containers filled with wood chips, alfalfa and straw in a process that is similar to the decomposition of livestock which has been used by the farming industry for years.

The container is shut and within 30 days the body is completely decomposed, including bones and teeth. The resulting product reportedly resembles a soil similar to that bought in garden centres to help vegetables grow.

Speaking about the unique burial idea Katrina Spade from Recompose – the company set to offer the service – said it is a great alternative for those who don’t want to go down the traditional path. She told The Telegraph: “Recomposition offers an alternative to embalming and burial or cremation that is natural, safe, sustainable and will result in significant savings in carbon emissions and land usage.”

However, the idea hasn’t been met with support from everyone with the Catholic Church reportedly opposing the bill which has since been passed in Washington.

In a letter to the legislative committee and published by The New York Times, Washington State Catholic Conference Executive Director Joseph Sprague said: “Disposing human remains in such a manner fails to show enough respect for the body of the deceased.”

The creative environmentally friendly option is just one of a number of new alternatives available for people across the world looking to steer away from traditional after-death options.

Many families opt for a traditional wooden coffin or casket to bury or cremate their loved one in and most of the time they come in traditional colours such as blacks, whites and browns.

However, a company in the United Kingdom is reinventing the design of coffins by selling a range of sparkly, brightly coloured versions. Appropriately named The Glitter Coffin Company, the vibrant coffins are intended to reflect and celebrate the life of the person being farewelled.

Families have a range of vivid colours to choose from including blue, opal, copper, red, green and purple. There are even fancier designs available including rose gold, disco silver and even a combination of several colours. Each coffin is also decked out with shiny handles for some extra sparkle.

According to the company website, each coffin is actually made to order and includes chunky crackle glitter that reflects off the sun. In the UK, the coffins have passed the Funeral Furnishing Manufacturer’s Association (FFMA) requirements, meaning they can be used for both burials and cremations. Because each glitter shard is made of non-chlorinated plastic, it doesn’t release emissions and therefore makes it safe for cremation.

Similarly, 100 per cent cotton fabric cloth that is bio-degradable is also used for the coffins, which also makes them safe for burials as well.

What are your thoughts on this new idea? Would you consider the human compost alternative?