Bitter feud between PM Scott Morrison and Macron heats up 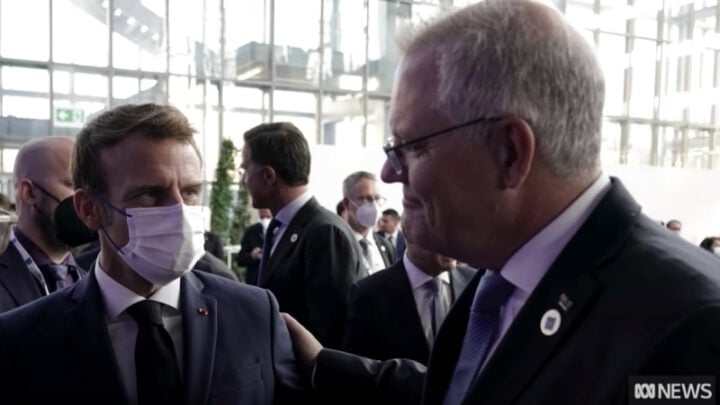 Leaked text messages have surfaced, reportedly between Australian Prime Minister Scott Morrison and his French counterpart, President Emmanuel Macron, as the PM struggles to get himself out of hot water over the abandoned French submarine deal.  The revealing messages appear to show that, contrary to France’s previous testimony, the French Government did know in advance that Australia might back out of the deal they had agreed to.

“Should I expect good or bad news for our joint submarines ambitions?” read the message that has been attributed to sender E Macron.

Let’s quickly recap the whole submarine palaver to give some context to these latest revelations (feel free to skip ahead if you’re already all caught up).

In 2016, the Australian and French governments agreed on what was then labelled the “contract of the century”. The deal was that France would supply Australia with diesel-electric Barracuda submarines, costing $90 billion over 25 years.

This deal, signed by former Prime Minister Malcolm Turnbull, would have benefitted both nations; with France gaining a secure, half-century-long partnership with Australia, the largest country in the South Pacific; and Australia reinforcing their submarine fleet with the new French subs.

The lucrative deal with Macron, however, began to unravel amid escalating tensions between Australia and China, as Australia sought comfort in collaborating with the powerhouses of the western world, the United States of America, and the United Kingdom. This collaboration spawned a new nuclear submarine deal, AUKUS. AUKUS takes advantage of the softer presence the United States have had in the Pacific in recent years, as it allows the US to (probably) build, and have control over, the fleet of submarines created under AUKUS.

When Scott Morrison announced that Australia had signed the AUKUS deal, a furious Macron claimed he was not warned that Australia might be considering other submarine deals, which could negate the 2016 deal between the countries.

The ensuing public slanging match between Macron and Morrison has reached a fever pitch this week, as the two national leaders attend the 26th United Nations Climate Change Conference (COP26), being hosted in Glasgow between November 1 and November 12.

At COP26, tensions kicked off as Macron and Morrison came eye to eye again, with Morrison looking jovial, and Macron, far less than impressed. Sensationally, the French prime minister went as far as to call our head of state a liar. 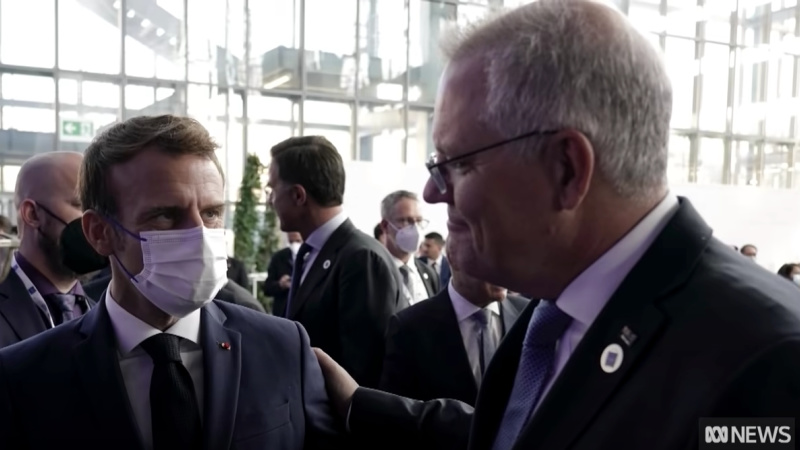 Macron took aim at Morrison on November 1, accusing Morrison of lying to him. You can see the footage of this accusation below.

I ask French President Emmanuel Macron whether Scott Morrison lied to him: “I don’t think, I know.” pic.twitter.com/3tcg4xrl90

However, Morrison refused to take this lying down. When initially challenged, Morrison danced around Macron’s accusations, saying he “didn’t agree” and didn’t “accept” them. A text message which has now surfaced, reportedly from Macron, makes it clear that the French PM did know the deal between Australia and France was in jeopardy.

Morrison was challenged at a press conference in Glasgow on Monday, November 1, as to why his office may have leaked such messages. The PM dodged the question multiple times, before finally saying he had “no interest in personalising these matters”.

“But I thought it would be good to give some of the background,” Morrison continued.

“I’m not going to cop sledging on Australia … I have to put Australia’s interests before any interests that involved potentially offending others,” he said.

When questioned on whether Macron was directly informed by Morrison that the France-Australia deal’s exit clause could be enacted, Morrison said: “This was a highly secure decision, a highly secure announcement, over which we had held these things incredibly tightly, not just for many months but in Australia’s case for more than a year.”

“It was my obligation to advise him of that directly. He was clearly aware over some months that there were concerns, and they were responding to those concerns.”

“We had correspondence and other messaging during that period. And we decided, in Australia’s interest, not to go ahead.”

“I was very clear that conventional submarines were not going to be able to meet our strategic demands, and that we would need to make a decision in our national interest.”

High-profile international spats aren’t the only woe our prime minister has faced since COP26 began. On day 1, a heart-wrenching video of Morrison trying, and failing, to make friends at a meet-and-greet attended by media hit Twitter. Each time Morrison attempted to chat with a group of fellow attendees, they ignored him, or turned away. Even Morrison’s former Finance Minister Matthias Cormann is seen hiding his hands in his pockets and looking down as Morrison approached, to avoid shaking hands with our leader.

More to come on the COP26 Summit and the Macron/Morrison feud as it happens.