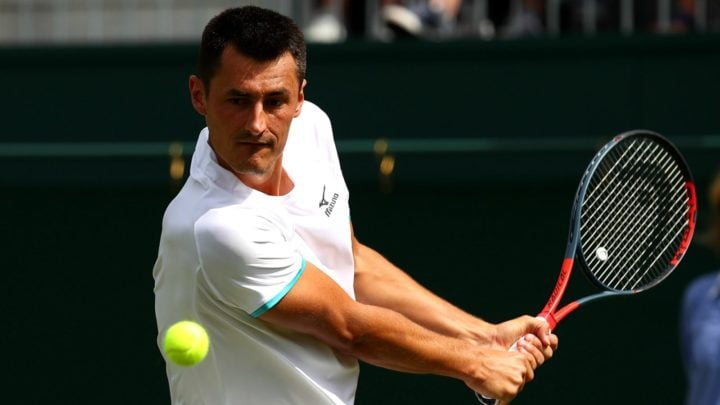 Aussie tennis star Bernard Tomic has been fined £45,000 (AU$81,000) after he crashed out of Wimbledon in one of the shortest matches in history – and the tournament’s controversial decision has now been slammed by several top players.

And Wimbledon has since made the choice not to grant Tomic his first round prize money of $81,00o, the tournament confirmed in a statement.

While fans have praised the tournament for taking a stand against what many claim is bad behaviour, fellow tennis players have expressed their outrage at the decision.

Tsonga particularly disliked the choice, saying it puts a dampener on his great performance in the first round match.

“It’s like what I did was not win,” he said, according to news.com.au. “It’s like I was just here and I just won because, they said, he didn’t play enough.”

Meanwhile fellow Aussie ‘bad boy’ Nick Kyrgios, who has found himself in hot water for his on-court antics during the tournament so far, claimed it was “outrageous” and “a little rough”.

The 24-year-old defended Tomic’s style of play and said just because he moves a little slower, doesn’t mean he’s not trying.

“I don’t agree with fining the guy all of his prize money,” the news outlet reports he said. “He earned his right to be in the draw. He played the whole year. He’s obviously winning enough to be at the most prestigious tournament in the world. To take all his prize money is outrageous.”

Their thoughts were echoed by American women’s player Sloane Stephens who claimed she’s not “100 per cent on board” with the tournament’s decision.

Meanwhile, others were in favour of the fine, with three-time Wimbledon champion Boris Becker saying it was a “painful” lesson for the tennis star which will hopefully motivate him in the future.

“We’ve been talking about it for a long time and I think it’s the right decision by Wimbledon to set the standard because now he knows he’s being watched and if he does it again, he’ll lose his prize money again,” he said, according to the news outlet.

Becker added: “It’s a painful lesson, it’s an expensive lesson but it’s the right thing to do.”

Fans have also added their two cents to the debate via social media with an overwhelming majority commending Wimbledon for its actions.

“Finally. How about not letting him play till he can behave himself,” one person wrote on Twitter.

While another added: “Great news. Why he was even there is beyond me. So many top quality players looking for the opportunity to play a slam and he disrespects the sport like that?? Arrogant and unbelievably disappointing.”

Did you watch the match between Bernard Tomic and Jo Wilfried-Tsonga? Do you think Wimbledon made the right decision to strip the Aussie player of his prize money?