Card is king: Over 2,100 ATMs axed as Australia edges closer to being cashless 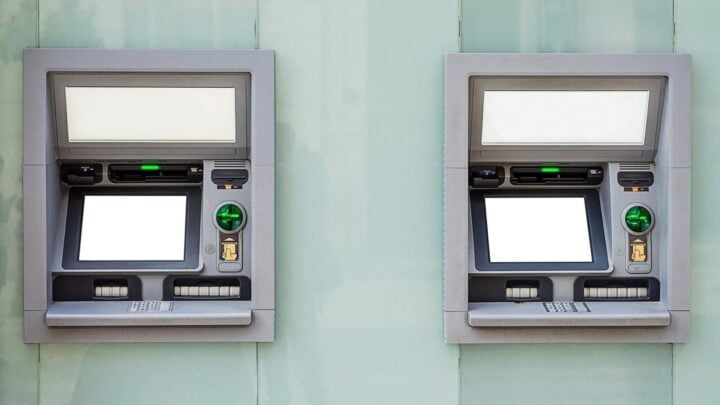 ATMs could soon be a thing of the past according to new data. Source: Getty.

Getting your hands on cash is becoming harder than ever before in the post-pandemic world as the nation’s banks shut the doors to hundreds of branches, as well as axeing more than 2,100 ATMs around the country.

The latest figures from the self-regulatory payments body, The Australian Payments Network, recorded the removal of 2,150 ATMs nation-wide during the June quarter alone. The number of ATMs has now fallen from 27,870 to 25,720 which marks the lowest number of machines available in 12 years and is also the largest drop in machine numbers in any quarter since 2010.

Branches also didn’t fare so well in the past year with the big four banks – ANZ, NAB, CBA and Westpac – collectively shutting 175 branches. Amid the closures was NAB’s Capital Office branch in Brisbane that first opened its doors in the 1870s.

The head of payments policy at the Reserve Bank of Australia, Tony Richards, told the Daily Telegraph that the sharp decline in cash withdrawals could be linked back to the early stages of the Covid-19 outbreak when customers and merchants started showing a preference for card over cash.

“Most of the ATMs removed have been in metropolitan areas, particularly in locations like shopping malls where there are multiple ATMs close by,” he said.  “Overall the bank expects the long-term downward trend in the use of cash to continue.”

The latest figures from the RBA also suggested that customers in general are now preferring electronic payments over using cold hard cash. However, the trend is being led by the younger demographics with high cash use being prevalent in only 4 per cent of 18-29 year olds compared to almost 40 per cent of those aged over 65.

But the trend is nothing new according to the Australian Banking Association’s chief executive offer Anna Bligh who said that Australians have been using less and less cash since 2012 and that “Covid-19 has only accelerated that trend”.

“Australia’s banks have invested heavily to keep up with the customers banking preferences with technology and data now playing a key role in how banks do their business,” she said.

Ian Henschke, the chief advocate from National Seniors Australia, said that the majority of the 2.5 million Australians who haven’t made the move to online banking are older Aussies who are wary of being scammed. But as the data proves, the move online is quickly becoming inevitable for many banking users – including the older demographic.

If you’re someone who’s interested in making the move to online banking but are worried about what’s involved – why not hear it from straight from the source? Join Starts at 60’s founder Rebecca Wilson as she talks all things online banking with ANZ’s Digital Customer Experience lead Ben Anderson and ANZ Global Chief Information Security Officer Lynwen Connick in a free livestream on September 4.

They’ll talk about the nitty gritty of digital banking, including how to maximise the benefits of digital banking, how your money is kept safe and why it’s really much easier than you think to bank using an app or online, instead of visiting a branch – all in easy-to-understand, non-techy terms.

You can find out more here.

Do you prefer cash over card? What's stopping you from moving online?