Back to basics: Aldi stores to ditch plastic and return to paper bags 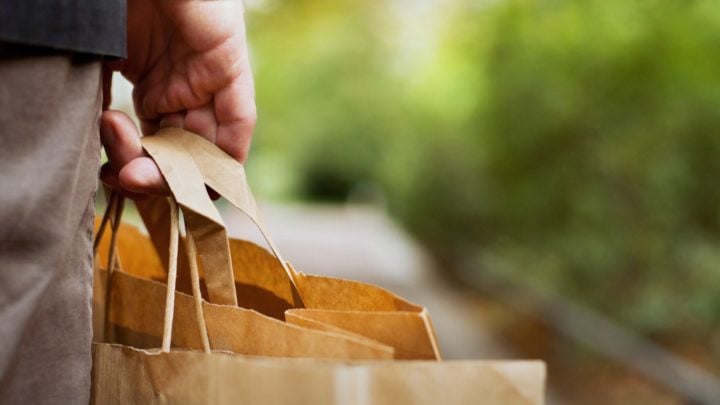 Aldi UK will bid farewell to plastic bags and replace them with paper bags. Source: Getty

Aldi stores are taking a step back to the 1960s and early ’70s and ditching plastic in favour of classic paper bags, as the supermarket chain trials an environmentally friendly option in a bid to reduce waste across the United Kingdom.

The popular supermarket chain will cut out all plastic bags throughout the UK, instead replacing half with paper bags and the others with compostable carrier bags, The Mirror reports.

From July onwards, Aldi stores will run a trial of the bags to gauge which option customers prefer. Once the trial is complete, the most popular bag will be rolled out across the UK and offered alongside the supermarket’s other reusable bags.

Many Baby Boomers will fondly remember filling up big paper bags to get their groceries home, before plastic ones were rolled out in the 1970s across the world – and it seems there could be a large-scale return to the old ways.

Meanwhile, the compostable bags are made of bio-degradable material that breaks down completely within 12 months.

Speaking about the decision, managing director of corporate responsibility at Aldi, Fritz Walleczek, said the company’s main aim is to be as environmentally friendly as possible.

“Reducing the amount of plastic we produce is fundamental to our commitment to being a sustainable and environmentally responsible business,” he told The Mirror.

“Cutting waste is part of Aldi’s DNA and we are constantly looking for new ways to reduce our environmental impact.”

Wallaczek added: “This new trial is one of the biggest we have ever launched because we want our customers to be involved and help us make the right decision for them and the environment.”

The announcement follows the decision by Coles and Woolworths last year to ban all plastic bags across Australia in hopes of also reducing waste in the country. Instead of offering free plastic bags, customers now have the choice of bringing their own in, or buying reusable ones ranging from 15 cents to $2.

Do you remember the days using paper bags? Do you think other supermarkets should follow suit and change to paper bags?