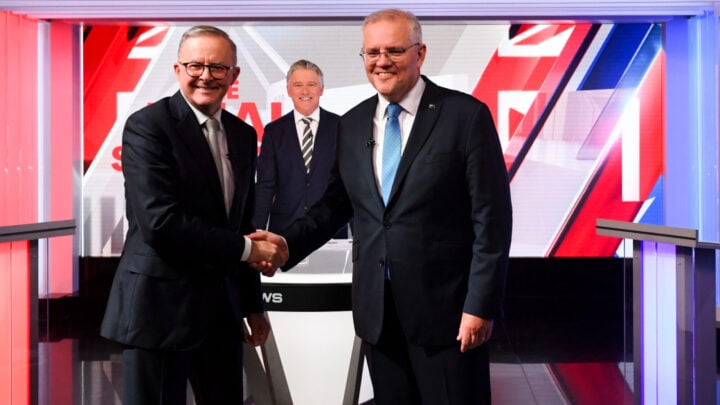 The third and final debate was noticeably calmer than the heated second debate. Source: Getty Images.

Prime Minister Scott Morrison and Opposition Leader Anthony Albanese have faced off once again for the final leader’s debate on Wednesday, May 11 with the cost of living dominating the exchange.

The debate aired on Channel Seven and was moderated by Mark Riley. The third and final debate was noticeably calmer than the heated second debate where the two leaders shouted over each other, the panelists and debate moderator Sarah Abo.

Climate change, anti-corruption, border protection and the mining tax were all discussed at length during Wednesday night’s debate but it was the cost of living that was the stand out theme during the debate.

The rising cost of living has been a contentious issue recently but came to the fore when the inflation rate hit its highest peak in two decades, with consumer prices jumping up by 2.1 per cent in the first 3 months of 2022.

In an effort to combat the rising cost of living, the Federal Government recently increased social security payments with those receiving the Age Pension, Disability Support Pension and Carer Payment now receiving an extra $20.10 a fortnight for singles to $987.60 and by $30.20 a fortnight for couples combined to $1,488.80.

Minister for Families and Social Services Anne Ruston said the increase was “the largest increase since 2013″.

Pensioners also received an extra $250 in their pockets in the form of the government’s one-off cash payment which Treasurer Josh Frydenburg stated is intended to only be a “temporary” relief to the rising cost of living.

Albanese announced his plan to address the rising cost of living by assisting with childcare payments and investing in renewable energy if his party wins the May 21 election.

When questioned on wages increases and the rising cost of living, the Opposition Leader said he “would absolutely welcome” a decision from the Fair Work Commission for a rise in the minimum wage, claiming that people are deciding “whether they will buy a steak or just have to stick to mince meat for their families”.

“If the Fair Work Commission grants a five per cent increase, that’s two cups of coffee a day.

Morrison his back at Albanese’s, claiming a wage increase will see job losses.

"You are smashing out those talking points." @Riley7News's response after @scottmorrisonmp gives his answer on the cost of living for Australian families. More: https://t.co/I8Xjiz6Yjl #ausvotes #7NEWS pic.twitter.com/vL1l5GglSL

Sticking to the cost of living theme, both leaders were asked whether free child care could continue after it was introduced during the Copvid-19 pandemic.

“Why do we do cheaper childcare? It’s not welfare, it’s economic reform,” he said.

Morrison stated “we have a responsible and affordable policy on childcare”.

“What we don’t do is go and promise the world when you know you can’t pay for it,” he said.

In a change of pace from previous debates, both leaders were asked to put away their swords for a moment and say something they admired about the other.

Morrison went first, claiming Albanese has “shown the ability to rise to be the leader of one of the oldest parties in this country, and he should be commended for that”.

“The thing about Anthony I’ve always admired he has never forgot where he has come from,” Morrison said.

“He grew up in housing commission and I have no doubt that the other day on Mother’s Day is always probably the toughest day of each year, it is for him.”

However, Morrison couldn’t help getting in one last barb in before wrapping up.

Albanese took a more diplomatic approach after stating that “Scott’s absolutely committed to his nation. And I admire that”.

Albanese won the final debate with 50 per cent of the 160 undecided voters favouring the Opposition Leader while 34 per cent were in favour of the Prime Minister. 16 per cent remained undecided.