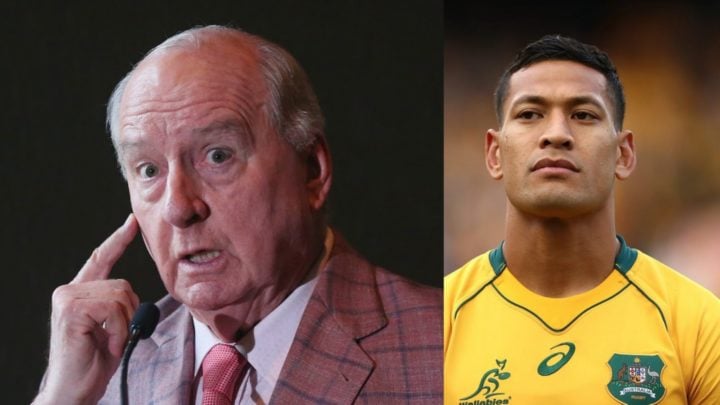 He’s made no secret of his support for rugby player Israel Folau over the last few weeks, and now Alan Jones has ripped into Rugby Australia in a fiery rant on air following news they’ve sacked the star player.

Rugby boss Raelene Castle delivered a press conference in Sydney on Friday, revealing that the 30-year-old star’s four-year contract has been terminated, after a decision was handed down from an independent three-member panel.

Folau now has 72 hours to appeal Rugby Australia’s decision to throw out his contract, worth $4 million.

Addressing the news on 2GB, Jones branded the decision “monstrous” and claimed Rugby Australia have acted unfairly throughout.

When host Ben Fordham asked if Folau would appeal, Jones added: “Of course he’ll appeal, this is just monstrous.”

He went on to claim it’s a breach of the code, adding: “I have no idea why they would want to pursue this matter, in this way, but it’s immensely damaging to the game and the legacy of the game.”

Jones then slammed a number of people with “monstrous salaries, employing the most expensive lawyers on the land to persecute and prosecute one of the greatest players in the world”.

The radio host claimed Folau was “terrorised” in the tribunal hearing and later told Jones he didn’t understand a lot of what the lawyers were talking about.

“He [Folau] said, ‘What have I done?’ He said, ‘They make me feel as if I’m a murderer’, and I said, ‘Well murderers don’t get life bans. Even murderers have terms on the punishment inflicted upon them. This is for life’.

Jones then let rip at the people behind the decision specifically, calling them the “inquisitors of the executioners” and adding: “Am I angry? Too right I’m angry. And I think somewhere along the line these people have got to be held to account and they go and we hope we never see them again in the administration of the game.”

As Fordham pointed out that employers have some rights too to ‘protect their brand’, Jones responded: “Of course an employer has certain rights, but you actually don’t own the person. This is not in the workplace, this is outside the workplace for proclaiming his Christian faith.”

Castle announced the news Folau’s contract had been terminated just hours ago in a press conference.

What do you think of the decision to sack Israel Folau?