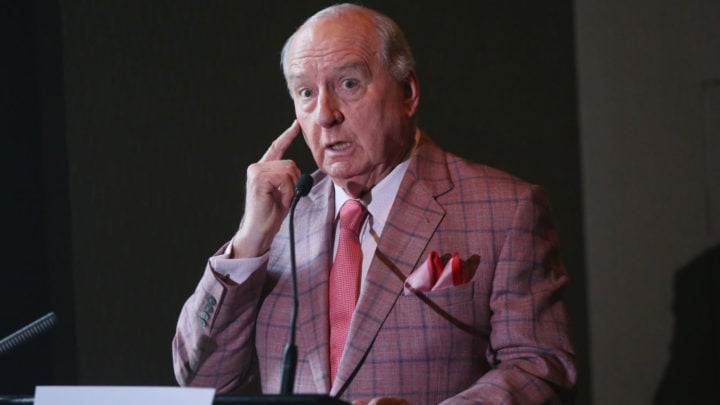 Jones will step down as the host of 2GB and 4BC breakfast at the end of May. Source: Getty.

Alan Jones has announced he is retiring from radio, with the 79-year-old set to step down as the host of the 2GB and 4BC breakfast program at the end of this month.

Jones made the shock announcement during Tuesday morning’s show and revealed that he made the decision after receiving advice from medical professionals, who warned him that his current workload was having a detrimental impact on his health.

“We are living in the world of coronavirus. The most repeated statement we hear is ‘we must listen to the experts’. Well, the experts are telling me in no uncertain terms, and not for the first time I might add, ‘Continuing with the present workload is seriously detrimental to your health’,” he told listeners.

“I have listened to the experts and I am taking this opportunity to indicate to my radio family that I will be retiring from radio at the end of this month.”

Jones has enjoyed an impressive 35-year career on the airwaves, which began in 1985 when he joined Radio 2UE as its morning host. He then moved to the breakfast show in 1988 and became a hit, thanks to his signature style of arguing, debating and breaking down complex issues.

He moved to 2GB in 2001, driving the station to the top of the Sydney market, and has remained in the role ever since.

Avid listeners paid tribute Jones on Tuesday morning as they came to terms with the news. One wrote: “You will be greatly missed Alan. I can’t imagine my mornings without you.”

Another said: “While another commented: “We will all miss you on radio Mr Jones, but your health is more important. All the best for a healthy radio retirement. Cheers.”

You will greatly missed Alan, your spot on radio maybe filled but no one can replace you. Enjoy your retirement and relax.”

Many of Jones’ colleagues also reflected on his impressive career, including Nine Chairman Peter Costello who said: “Alan Jones has a unique place in Australian media. His ratings record makes him the outstanding broadcaster of his generation. His ratings record will never be matched.”

Costello added: “He was always passionate and relentless in pursing issues on behalf of his listeners. And he was tough – as I can attest when I was on the other side of the microphone.

“Away from the microphone, Alan was warm and generous. Many people benefited from his support. He neither advertised nor sought recognition for it.”

While Nine CEO Hugh Marks said: “I want to acknowledge Alan for his contribution to 2GB, and prior to that 2UE, over many years. Alan has shown a dedication to his craft unlike any other and with that dedication comes excellence.

“This focus on his program’s content has given him outstanding audience loyalty demonstrated over decades. We wish him well and thank him for all he has done.”

Do you listen to Alan Jones? Are you a fan of his show?