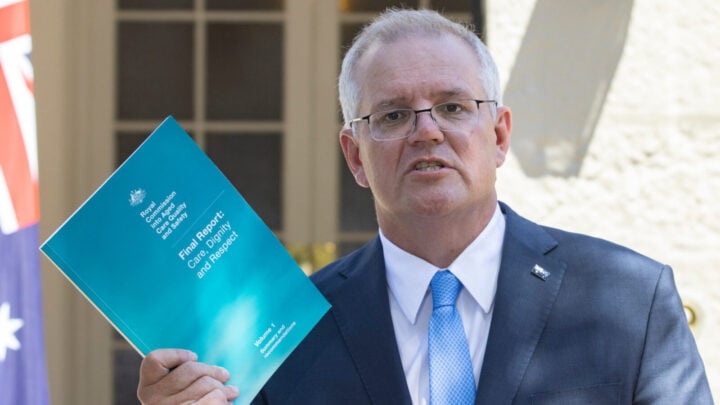 Scott Morrison holds a copy of the final report from the Royal Commission into Aged Care Quality and Safety. Source: Getty

The final report from the Royal Commission into Aged Care Quality and Safety describes Australia’s aged care system as a disgrace and a “source of national shame”.

The eight-volume report was released to the public on Monday and called for “transformational” reform to the system.

Speaking to reporters on Monday, Morrison said he had spent the past few days reading the report, which was submitted to parliament on Friday, February 26, and that it was clear it was time for a “generational change” to Australia’s aged care system, one that would put the needs of elderly and vulnerable Australians first.

The report contains 148 recommendations for sector reform. The commissioners have offered conflicted recommendations on some issues, which Morrison said “highlights the complexity of this problem”.

Commissioners Tony Pagone QC and Lynelle Briggs AO described Australia’s current aged care system as complicated and neglectful of the very people it is meant to care for.

“The accounts of substandard care were always sad and confronting. The abuse of older people in residential care is far from uncommon.

“In our inquiry, we heard of physical and sexual abuse that occurred at the hands of staff members, and of situations in which residential aged care providers did not protect residents from abuse by other residents. This is a disgrace and should be a source of national shame. Older people receiving aged care should be safe and free from abuse at all times.”

The report recommends a five-year timeframe to implement the measures set out in the document, measures that include increased transparency on fees, further protection against physical and chemical restraints, and better protection against mistreatment and neglect in residential and home care.

Morrison said the report was a deeply personal document that called for fundamental changes to all aspects of aged care in Australia.

“There’s one thing that I think pretty much sums up the whole approach and that is the person to whom you’re seeking to provide care has to be at the centre,” he said. “That’s the nub of this. That their dignity, that their care, that their respect for them as a human being and a fellow Australian has to sit at the centre. Now, that’s not a glib statement.

“That’s a statement with great policy power behind it. And that’s the sort of thing that should [be] enshrined in the Act, as the royal commission has recommended.”

The royal commission spent two years investigating the aged care system and received more than 10,000 submissions. It heard from 641 witnesses, many of whom detailed harrowing experiences of abuse at the hands of carers, and viewed shocking video footage that showed aged care residents being physically abused and neglected.

There’s no doubt it will cost a significant amount to implement the recommendations in the report, but Morrison told reporters he wasn’t yet sure what that cost would be.

Industry leaders have spoken out following the report’s release. The Council on the Ageing (COTA) said older Australians shouldn’t wait a day longer than needed to be guaranteed choice, dignity and quality in aged care.

“When it comes to the crisis consuming our aged care system, the royal commissioners are unanimous in identifying the issues of neglect, abuse, indifference and poor leadership,” COTA Australia chief executive Ian Yates said.

“It’s now the Federal Government’s job to map out the structural reforms needed to build a safer, accessible and transparent system in an accountable way.

“The fact that there are a few alternative recommendations from the commissioners on the best way to manage and fund the aged care system in no way lets government off the hook. There are no barriers to commencing urgent and long-awaited reforms.”

Have you had any experience with the aged care system? Which changes would you like to see first?