‘How thoughtless’: NRMA ad pulled due to distressing and disturbing bushfire scenes 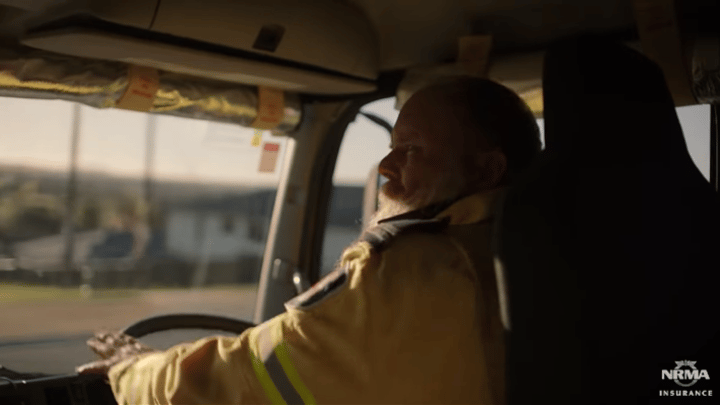 NRMA Insurance has had its latest ad pulled from television due to distressing and disturbing bushfire scenes. Source: YouTube/NRMA Insurance

NRMA Insurance has been put in the spotlight for all the wrong reasons of late, with the company’s latest advertising campaign “First Saturday” pulled from air for the “distressing” and realistic bushfire scenes across Australia.

Ad Standards made the decision recently, after receiving multiple complaints from Aussies — some of which are RFS volunteers — who found the content of the ad thoughtless, disturbing and frightening for those who have been affected by the terrible bushfires over the years.

The aim of the television ad was to convey the risks faced by first responders at the frontline of bushfires in Australia and encourage people to plan ahead and ensure their homes are safe and hence reduce the burden on firefighters in the future. NRMA called on Aussies to perform a task on the first Saturday of each month to make their homes more bushfire ready.

However, instead of invoking change, some found the ad far too confronting to be on television and hence made serious complaints to Ad Standards to have it removed from the air. The main concern was the scenes inside the truck and the fear that firefighters were in danger as they moved through thick some and approached the flames.

“As a RFS volunteer who fought bushfires for 42 days last summer and lost our home I find the NRMA First Saturday ad campaign very disturbing and in poor taste,” one person said. “NRMA were not in the fire ground to assist and we don’t need it shoved in our face. Also, the ads don’t tell us anything, just sensationalism. The campaign seems to be designed to reduce NRMA insurance liabilities not help first responders. How does it help me? How thoughtless.”

While another complaint read: “As a parent of a young RFS volunteer I find this extremely disturbing and upsetting, as this could be my son in a few months time. Friends who are firefighters in the RFS and have been for many years find it disturbing and causing them to relive frightening experiences. It has been a source of upset on a nightly basis when the ad comes on and my husband rushes to switch channels.”

Ad Standards agreed with these complaints and ruled NRMA had breached the Code of Ethics, based on section 2.3, which covers the portrayal of violence. The panel claimed that the fearful faces of the firefighters, the sounds of sirens, panicked voices and the vision of the thick smoke and roaring flames created a “very strong impression of threat and menace”.

But, NRMA argued against this and said the ad actually draws attention to the important services undertaken by first responders and inspires people to take appropriate steps to protect their homes. They also said the ad was made in consultation with the RFS, the Australian Red Cross and the SES, and was simply a re-enactment of what had occurred during the devastating bushfires over the years.

And others Aussies have agreed that it was an effective way of getting across the message and highlighting the hard work that the firefighters do every year to help residents stay safe. One person even claimed it was “award-winning”.

“Nice video! I like the way it has been put together,” one person wrote on YouTube. “As a first responder in the NSW RFS I know exactly what this experience is like, especially in the wake of last season’s catastrophic fires. Thanks for putting this out there! It’s nice to be able to show the public a snapshot of what it’s like to go into these sometimes life threatening situations. But I think it’s one of the best jobs in the world. Thanks guys.”

And another said: “Wow. Congrats, great ad. Award-winning. We will dedicate the first Saturday of September to Fire Safety. Thank you.”

Despite the mixed views on the content of the ad, Ad Standards ultimately ruled it was breach of the code. NRMA disagreed with this, but did modify it to include a disclaimer which reads: “‘The following was filmed under controlled circumstances and is a re-enactment using real NSW RFS volunteers”.

The company also agreed to discontinue the ad on television by September 30, but it can still be viewed on YouTube.

What do you think of the ad? Do you think it was right to pull it, or do you believe it's appropriate for television and helps to spread an important message?