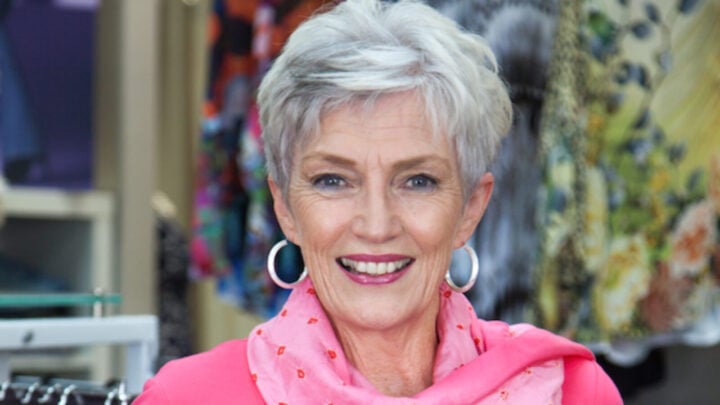 Vivienne Cable combined a Household Loan with the Age Pension, super and earnings from her styling consultancy to boost her income and give her an emergency nest egg. Source: Supplied.

Anyone who’s worked hard all their life, pinched pennies to raise kids, then found themselves without enough superannuation to support them in retirement will understand Vivienne Cable’s story.

Vivienne owned and ran a women’s fashion store in Sydney’s Chatswood for 25 years. Like many owners of small businesses, she did everything from order stock to brainstorm its marketing, and it was her trusted presence that kept loyal customers coming back. But that meant that when she decided to retire in 2017 at the age of 71, there wasn’t actually a viable business to sell.

“I loved doing it but I was the business,” she explains. “Everyone who came in had an image consultant who looked after them personally, we did style seminars, fashion parades, and I did personal style wardrobe consulting. But that’s what made it difficult to sell – it was just too unique and too based around me.”

Also like many owners of small businesses, Vivienne put business survival ahead of planning for her own retirement. “For years my accountant didn’t even suggest that I become an employee of the business and pay myself super,” she recalls.

Vivienne did, however, own a two-bedroom, two-bathroom unit in Sydney that was fully paid off – thanks to the appreciation in value of a previous property over more than a decade.

So with just $100,000 in super but mortgage-free, Vivienne settled into retirement on the Age Pension, conscious that short of selling her apartment, she had no ‘back-stop’ if things went seriously awry.

“I found I was being very cautious,” she says. “I was terrified of having to take money out of super and having it dwindle. I didn’t want to have to think about where money was coming from for things, like what if I need to change the car or have to fix something in the apartment?”

And while she’s been able to supplement her pension and super with some personal style consulting work – she still has a devoted clientele of ladies who value the fashion know-how she dispenses at Image by Design – her income didn’t stretch to luxuries or big expenses such as helping out her six grandchildren.

“I started thinking it’d be wonderful if I could do something a little bit more substantial for them,” Vivienne says. “As well, I needed to upgrade a few things in the apartment that I’d been putting off … I looked around at all the things I’d worked so hard for and thought, this is crazy. I didn’t want to have to keep saying ‘no’ to things.”

That thought drove Vivienne to ask financial advisor Sophie Atikinson at Visualise Wealth to explore options for increasing her income and providing a nest egg that she could use as a buffer against unexpected expenses. Sophie recommended a Household Loan from Household Capital.

A Household Loan is a new type of reverse mortgage that allows older homeowners to use a portion of their property’s value as security against a loan that can be taken as a lump sum, regular income payments or both. No repayments are required during the life of the loan, which can usually be structured so it doesn’t impact Age Pension eligibility.

And unlike reverse mortgagors of the past, Household Loan customers are strongly protected by legislation that prevents lenders such as Household Capital from allowing a loan to grow to more than a property is worth, or from removing homeowners from their property. Household Capital also requires all customers to take independent legal advice before accessing a Household Loan.

Vivienne says that, like many older Australians, she’d been warned against using a reverse mortgage based on the issues with the financial product in the past, so she investigated Sophie’s suggestion very carefully for more than 12 months before deciding to release $80,000 of her home equity.

“Fiona at Household Capital was brilliant,” Vivienne recalls. “She put my mind at ease by saying I should take the paperwork away, consult my advisor and take my time to think about it. But at that point I wasn’t afraid of it because I’d done the research and I knew, at 74, I was the right age, in the right situation and I wasn’t drawing down too much equity.

“My kids were just so keen for me to have a life that I deserved that they encouraged me to go ahead.”

Just as she did plenty of research before embarking on equity release, Vivienne has made careful plans for how she’ll use her Household Loan, some of which she’s taking as an income boost, some she’s used for small home renovations and the rest as a fund for travelling, as well for a buffer against big, unexpected bills.

Vivienne advises older homeowners in a similar situation to consider equity release with an open mind, backed by plenty of research.

“Do your homework to see what you actually need and what you want to change in your life, so you’re sure of your expectations,” she recommends. “Then when you feel OK about that – do it! You’ll know when it’s the right time”

Vivienne says she was surprised to find in hindsight how much her nagging concerns about retirement income had been getting her down.

“I never knew I’d feel such relief when that [loan] money came through,” she says. “I can get the full pension, do some consulting work and use my Household Loan and it still doesn’t impact my pension … I’ve also had fans installed, repositioned some lights and re-carpeted and re-painted my apartment.

“There is one big trip I’d like to do too, taking my two daughters to South Africa and showing them the places I fell in love with when I visited there 10 years ago. It’d be such a wonderful thing to do and to share with them.

“But mostly it means that I can say ‘yes’ to a few more things, instead of ‘oh dear, wouldn’t it be nice …’. We work too hard during our lives to have to say ‘no’ all the time when we’re retired.”

HOUSEHOLD CAPITAL INFO Important information. Applications for credit are subject to eligibility and lending criteria. Fees and charges are payable, and terms and conditions apply (available upon request). Household Capital Pty Limited is a credit representative (512757) of Mortgage Direct Pty Limited ACN 075 721 434, Australian Credit Licence 391876. HOUSEHOLD CAPITAL™, the Star Device and Household Capital and the Star Device are trademarks of Household Capital Pty Ltd.
IMPORTANT LEGAL INFO This article is of a general nature and FYI only, because it doesn’t take into account your financial or legal situation, objectives or needs. That means it’s not financial product or legal advice and shouldn’t be relied upon as if it is. Before making a financial or legal decision, you should work out if the info is appropriate for your situation and get independent, licensed financial services or legal advice.

Are you in a similar situation to Vivienne? Have you explored all of the options for increasing your retirement income?