How to spot and prevent elder financial abuse 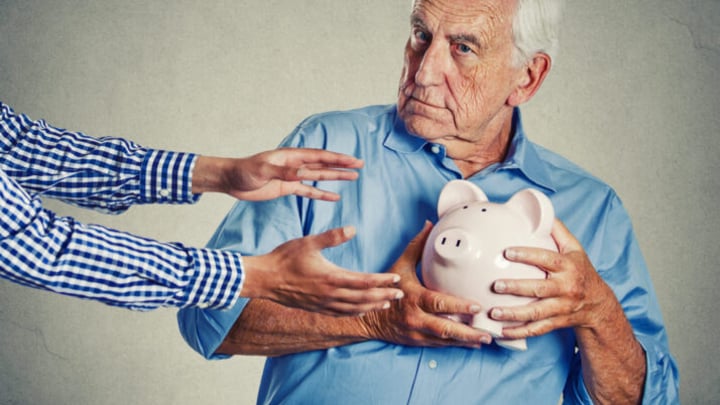 The laws surrounding elder abuse vary from state to state but, sadly, the abuse is usually discovered after the event. Source: Getty

What is elder financial abuse?

Elder financial abuse is a particularly gutless crime, where younger people — typically the flesh and blood of the victim — prey on the fragility and emotions of an older family member to extract money or some other financial benefit. Houses are sold, bank accounts stripped bare and prized possessions taken, all with some perverted justification that the older family member doesn’t really need the assets, or that junior should be allowed to receive their inheritance early, before mum or dad pass away.

Too bad that there might not be enough money left to place mum or dad into a decent aged care facility. Too bad that the gifting of the assets could potentially leave them without the asset and, worse still, possibly reduce or cancel their Centrelink age pension.

I was visited by a young man in his 30s who was with his elderly mum. The plan was for junior to buy a home in Bali, a few kilometres away from the bustle of Denpasar. Of course, 83-year-old mum would be welcome to visit whenever she liked and, presumably, whiz about on the scooter he owned. Working in casual jobs here and there with no security of his own, the man’s bank had demanded that his loan needed a guarantor. Enter our elderly widow.

Some time ago, planners were called on to give financial advice to guarantors of loans. It was a requirement imposed by banks which, presumably, allowed them to shift the blame on to the planner if the exercise went pear-shaped and the guarantor claimed they didn’t understand the risks.

As I explained to the 83-year-old widow what could happen if junior didn’t pay back the loan, the boy’s face became darker and darker. The bank would come after her for the money, I said, and if she couldn’t pay, would more than likely sell the home she had lived in for more than 50 years. That’s because the bank might have difficulty forcing a sale in Bali if the son defaulted. Finally, there was a good chance that Centrelink might regard this as a gift (albeit forced) and cancel her pension for five years. “You never told me that,” she whispered to her son. I’m not sure if the deal proceeded, but our account was never paid.

What are the early warning signs?

Sometimes we see the early signs of such abuse decades before the wholesale theft occurs. In some cases, one could argue, the same outcome is achieved through stealth: the child who refuses to fly the nest and pay a respectable amount of board, the kid who perpetually holds their hand out for the small loan that’s never repaid.

Or, more often than not, the young adult racks up the credit card, mobile phone or utility bills and comes asking for mum and dad to bail them out. Once or twice maybe, but when the debt’s still there and they’re holidaying in Phuket, you have to wonder. All of this while mum and dad are trying to cobble together a retirement plan of their own.

At this stage, the laws surrounding elder abuse vary from state to state but, sadly, the abuse is usually discovered after the event. Once the money’s spent, there’s typically little hope of recovery.

What prevention measures can you take?

Your best option is to set up protection measures to prevent elder abuse from occurring in the first place.

One of the main techniques of abusers, is to gain control of bank accounts and other financial assets. That might be the simple addition of a signatory to the existing accounts, a secondary card that can access cash, getting your online logins and password details, or even setting up a new, joint account, so be wary of these areas.

Of course, sometimes you will need someone to help you as you age, and we’re not saying that all of these arrangements are bad. But look for those warning signs mentioned above.

Another protection measure is to set up an Enduring Power of Attorney (EPA). This is the primary, preferred tool for elder abuse and can be an extraordinarily powerful tool that allows the person you appoint to even sell your home.

Each state varies on the requirements to set up an EPA, but there are a couple of simple protection measures you can employ. The first might be to have the EPA only “switched-on” when you are declared medically incapacitated. That normally requires two separate medical reports to that effect, lodged with the relevant authorities in your state. The second is to make sure you appoint two people rather than just one to manage your affairs. That’s not completely fool-proof, but there’s nothing to stop one of your two nominees being a friend who has nothing to do with the family. For money to be spent or assets to be sold, both people appointed would need to agree for it to happen.

For more info on EPA, read this. For more money tips from Nick Bruining, head here.

Did you find this article helpful? Do you know someone who was a victim of elder abuse?