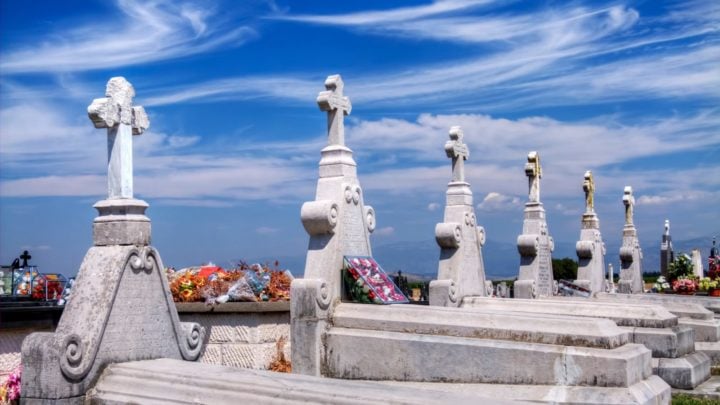 The days of identical funerals and memorials are over, with more personalised send-offs taking over.

Think back to the last time you went to a funeral. Was it a solemn, formal affair, with a hymn-based service held in a church or chapel? Or was it something more casual, perhaps a gathering of family and friends to celebrate the life of a loved one passed on?

While the former used to be the norm for funerals, Baby Boomers are changing the tone for final send-offs. While there are regulations covering registration of death, cremations and burials, when it comes to a ceremony to lovingly remember a person’s life, these days there’s no rule book.

So if you’re recording your own funeral wishes or find yourself in the position of organising a funeral for a loved one, don’t feel obliged to follow tradition, because most funeral traditions have been relegated to the past, not reality.

Myth busted: A funeral service should be held in a church or chapel

Although many services are still held in a church or funeral home chapel, Jenny Briscoe-Hough, the director and general manager of Tender Funerals, says there’s a growing trend for a less formal style of ceremony.

She says rather than the more traditional approach of a formal service, followed by a procession to a crematorium or cemetery, with a reception afterwards, people are free to design their own send-off.

While people of faith might lean towards tradition, Briscoe-Hough says a funeral service, complete with the casket or coffin, can be held nearly anywhere. (Where the service takes place without the body present, it’s usually called a memorial service.)

“In Byron Bay, they have ceremonies on the beach, so it’s all about the culture of the place,” she says, but adds that there are some restrictions you should keep in mind.

“There are some places that won’t let you hold a ceremony, for example, a council saying you can’t bring a body into this park,” Briscoe-Hough explains. “But it’s worth asking because more and more people are saying ‘yes, you can have a ceremony here’. And you could have a memorial service just about anywhere.”

That means you could hold a service in a park, a place that held special memories for the deceased, or even your own backyard.

Myth busted: You need to hire a funeral celebrant

If you engage the services of a funeral director, it’s likely you’ll be presented with a range of options, including a formal church or chapel service and a memorial service officiated by a celebrant.

But unlike a wedding, where the celebrant needs to be licenced, Briscoe-Hough says different rules apply to a funeral. Although a professional celebrant is someone who is practised in public speaking, can help you with eulogising your loved one and has a ready store of appropriate readings, you don’t need to celebrant to do these things.

“You don’t have to pay a celebrant, in fact, anybody can be a celebrant,” Briscoe-Hough says. “You might have somebody in the family who could do it and remember, there’s no ‘proper’ way to organise a funeral.”

For some types of service, such as a quiet vigil among family and friends, a celebrant may not even be necessary, Briscoe-Hough adds. Or a service could be as simple as family and friends taking turns to share their memories of the deceased.

We explain here how a no-expense-spared funeral can add up and explain how you can keep within budget, while still organising a respectful send-off.

And Briscoe-Hough reckons that cutting costs isn’t the only good reason to be more hands on with the funeral organisation process – being more involved in the preparations can also help with the grieving process.

“People want something to do with their time,” she says. “A lot of men particularly want to be involved; they prefer to be doing something, which is a good thing.”

Myth busted: There is one acceptable format for a funeral service

Although there are funeral customs and rituals used by various religions, that doesn’t mean everyone has to follow the same script.

Instead of a funeral service, you could choose to hold a memorial service after the person is laid to rest, using music (you might even have a family member or friend who can write or perform music for the occasion), poetry or other readings, video, a slideshow or presentation of photographs.

If you’re stuck, then try searching ‘music for funerals’ on the internet. You’ll find suggestions across the entire music spectrum – from Schubert’s Ave Maria to Monty Python’s Always Look on the Bright Side of Life and, of course, Frank Sinatra’s My Way.

Think about memorable ways to really capture your loved one’s passions in life. For the keen gardener, it could be giving seed cards to the mourners, for avid readers a copy of their favourite book, or for fanatical sports supporters, everyone could wear their favourite team’s colours or sing their club anthem. Veterans can be honoured with the display of their service unit’s flag or colours, their uniform or well-worn boots. The family coat of arms or a blown-up copy of the family tree is a lovely way to pay tribute to the family’s history.

Again, the internet is full of quirky and cool ways to remember a special person, that don’t cost a lot and help bring mourners together in an uplifting way. One suggestion is to assemble a ‘memorial table’ at the service that displays items meaningful to the person being celebrated. Another is to ask attendees to contribute to a ‘quote board’ by writing down the deceased’s favourite jokes or sayings, or have mourners fill out a fun questionnaire about the deceased’s little habits and hobbies as they remember them.

These ideas can be integrated into the ceremony, used to break the ice beforehand or help people smile after the ceremony has concluded.

Of course, some forward planning helps. To save your family guessing your wishes after you’ve gone, why not talk to them now about how you’d like to be remembered? That doesn’t mean you need to plan your whole funeral in advance – it could simply be part of an ongoing discussion about your family’s future. After all, there’s no need to stick to a rule book, so why not do it your way?

Have you been a guest at a funeral that didn’t follow the usual script? Tell us what you thought of the ceremony.