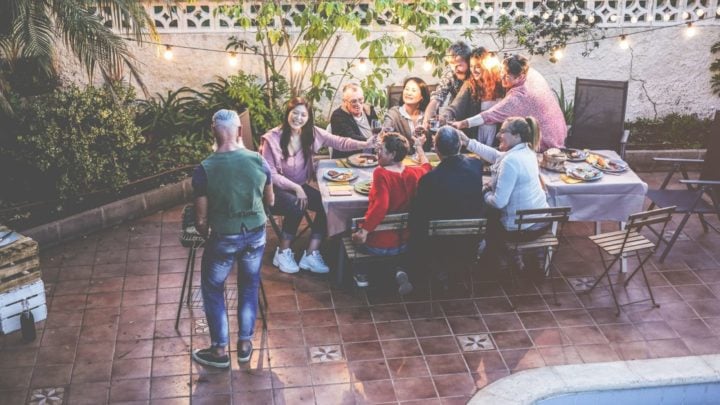 Having the money to continue to enjoy good times in the home you love is one of the benefits of accessing the equity in your home through a Household Loan.

Many older Australians have a big problem. They should be looking forward to a retirement of 25 years or more. The problem? Being able to pay for it.

If you’re like most of today’s pre-retirees and retirees, you were midway through working life when compulsory superannuation kicked in. Also like most retirees, you’ll probably qualify for at least part-payment of the Age Pension. But that may not be enough to cover your needs – particularly if big, unexpected expenses come up.

That’s where Household Capital’s Household Loan can help you fund a long retirement more comfortably, by giving you access to the savings you’ve built up in your home over a lifetime, without having to sell your family home.

You might be thinking, well, what’s new? Home equity loans, or reverse mortgages, have been around for years, haven’t they? That’s true. But Household Capital is the first Australian business to focus on providing retirees with a way to use their home equity as a key component of long-term retirement funding.

A cool trillion dollars, that’s how much equity Australia’s four million Baby Boomers have saved in their homes. In fact, your average retiree owns a home worth $700,000, which is well above the average super balance.

And while downsizing can release some of that money (the government’s recent downsizing-to-super scheme was aimed at promoting just that), the fact is that an overwhelming majority of Aussies want to stay put in the family home when they retire.

If that sounds like you – asset rich in terms of property, but without enough savings or super to feel confident in your retirement income – then tapping into the savings in your home could provide the solution.

“Most of our customers use their home equity for two or three different purposes,” he says. “That can be to refinance an existing mortgage, top up their investments, draw down a greater income, to renovate their home or give to their children.”

Traditionally, access to that home equity has been available through a reverse mortgage offered by one of the major banks. But despite lending as much as $700 million in a single year to retirees not that long ago, the Big Four banks have now turned off the tap.

“They withdrew from their traditional reverse mortgage products and left Australian retirees without widespread access to their home equity,” Funder says. “That’s the gap Household Capital intends to fill and we can do that responsibly.”

With a reverse mortgage – also known as a home equity release product – the lender advances either a lump sum or a series of payments that are secured against your home. As the borrower, you don’t make repayments because the interest is ‘capitalised’, which means that it’s added on to the loan account so the size of your loan grows over time.

You can’t default on the loan because no payments are required, and you don’t have to repay the loan and the accumulated interest until the property it’s secured against is sold – which usually happens after you die. Under Australian law, the lender can’t throw you out of your home or chase you for the balance.

What happened to reverse mortgages?

A review by the Australian Securities and Investments Commission (ASIC) into reverse mortgage lending uncovered some reasons for older Australians be wary of using the product.

ASIC suggested reverse mortgages were often seen as a ‘last resort’ for older Australians with urgent financial needs. Borrowers often ended up with more debt than they needed, but without much attention paid to their longer-term financial needs – selling a reverse mortgage was all about the loan, not how the borrower intended to use the loan.

So, it’s not surprising that the major banks, scrambling to protect their reputations, stopped offering reverse mortgage products.

There’s no doubt many asset-rich but cash-poor older Australians need a way to release equity from their properties to improve their retirement incomes or pay life-changing expenses that come up in later life.

Funder says that’s why Household Capital is taking a different approach to the banks, which were focused on lending lump sums for short-term use.

“To be truly responsible and to get it right, you have to make sure that people have long-term access to their home equity to fund their full retirement,” he says. “To do that, you have to work with retirees and plan for the long-term”.

A lower rate means you, as the borrower, keep more of your home equity over the long term – and that means more equity to potentially leave as an inheritance or use to fund aged care needs in the future.

Household Capital also offers a facility to make regular withdrawals from your home savings, as well as lump sum payments.

“That gives people, particularly on the part-pension, a lot more flexibility,” Funder explains. “We’ve also got an interest-only approach, where people can access capital, refinance a loan, and continue to make payments to suit them.

What is Household Capital?

Household Capital might be a new name, but there’s no shortage of experience behind the scenes.

Drawing on deep expertise from a broad range of fields – retirement policy experts, economists, actuaries and finance professionals – the company is also supported by some of Australia’s most capable industry leaders (including ME Bank).

Funder says the company was set up with a clear mission – to help Australian retirees use their home equity as part of responsible, long-term retirement funding.

“Nobody’s ever done that before,” he says. “We’re proud to be the first, and think that is the future, as a core part of Australian retirement.”

Do you have plenty of questions about how to fund your retirement, how much you really need to retire and what you can do if your retirement income falls short of your needs? Download this free e-guide to learn more about your options.

Have you considered releasing funds from your home to use as retirement income?