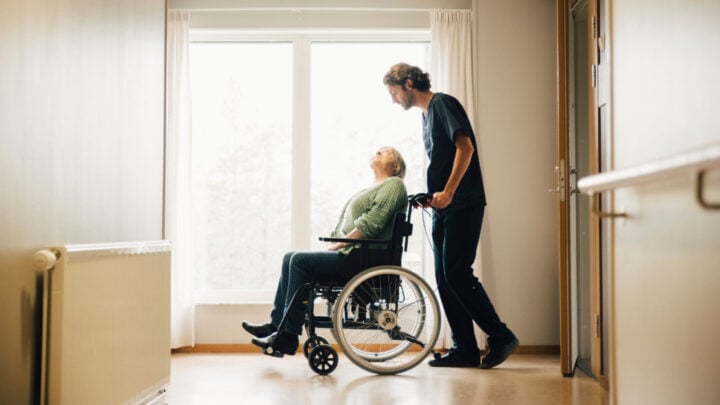 The number of people in permanent Aged Care in Australia is expected to nearly triple in the next 30 years. Source: Getty

For ageing Australians, there’s no place like home. Or is there? When my own home care company, The CareSide, did a recent survey, it revealed a key difference in views between older Aussies and younger ones when it came to residential aged care. And it’s not the difference you’d expect.

Overall, 68 per cent of the 1,122 people we surveyed said that they’d prefer to access home care services, rather than move to residential aged care, if they needed support as they aged. But that preference was significantly stronger among young adults. In the survey, 70 per cent of people aged 18-39 said they hoped to stay at home when they were older. Of people aged 40-64, 66 per cent said the same. That’s despite the fact that you might think news coverage of the Royal Commission into Aged Care Quality and Safety would be less worrying for those further off needing support than those who may need it in the coming decade or less.

Older survey respondents, on the other hand, were less likely to favour home care. Among those 65 and older, only 52 per cent agreed that care in home was best. This means that almost half of older Australians said they would prefer to live in a residential care facility — not the response you might expect!

That got me thinking about why older generations would be more accepting of the prospect of a nursing home, while younger Australians strongly prefer home care? One reason could be that access to in-home aged care is a relatively recent phenomenon for Aussies. Ten years ago, only 21 per cent of people receiving aged care subsidies were living at home. Today, even though home care utilisation has grown faster than any other aged care type, it still makes up just 36 per cent of aged care services. People also tend to say they prefer an option they’ve already chosen, so it’s possible that older survey respondents said they prefer residential care because they live in it or have helped their parents make the choice to use residential aged care.

On the flipside, younger Australians have come of age in a period where receiving home care is more common. They may have seen their grandparents or parents accessing home care services — something older Australians would not have experienced — and the funding of home care is a mainstream news conversation, so perhaps this has created an expectation that home care can and should be made available to everyone who needs it.

It’s also possible that people change their minds about their care preferences as they age, or become more realistic about the amount of support they need or will need in the future, based on their own health and the subsidies available to pay for that support. Perhaps the older respondents in the survey once thought they would prefer home care but later realised that residential care could better meet their needs.

Ageing in place does have undeniable advantages that can’t be replicated by residential facilities. At home, you keep your neighbours, your community, your routine and your privacy. Even if you need a carer to help with cooking, you can enjoy the food you like on your own schedule, instead of dining with no menu choice on a schedule you can’t change. Even if you need someone to drive you to a shop, you can go to your favourite stores and run into familiar neighbours and friends.

Living at home, in your familiar community, is a right that older Australians should be able to enjoy as long as they choose – no matter how their health needs change.

Will the younger Australians in this survey change their minds about their care preferences as they age? Only time will tell, but in the meantime, the message of this survey is clear – demand for home care is high and growing.

And right now, that demand isn’t being met. As of the report in December 2020, nearly 100,000 older Australians were still waiting to receive a home care package at their approved level. Without significant increases in funding, home care won’t be available to the majority who want it.

This represents a challenge for the aged care system, one it must rise to meet. Australia is a great place to enjoy your retirement years, and changing health needs shouldn’t be a barrier to that enjoyment. Increased funding and more home care packages will enable more elderly Australians to enjoy the independence and privacy of home in their golden years.

Did these survey results surprise you? What are your feelings about home care versus nursing homes?